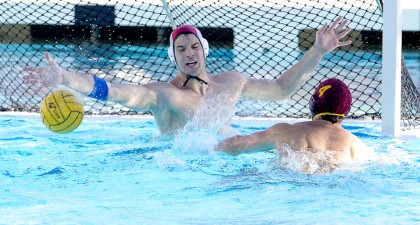 Wrapping up our coverage of St Francis Brooklyn Men’s Water Polo is Michael Randazzo. Over to you, Mike!

St. Francis goalie Igor Mladenovic, who had 13 saves, was valiant in defeat, as his aggressive play around the Terrier net kept his team close for two quarters. Leading 4-1 to open the third period, Davie, Bell and Butler scored three quick goals in less than a minute, turning a competitive match into a rout. Once behind, St. Francis simply could not overcome USC’s advantage in talent, depth and experience.

On Sunday, USC defeated University of the Pacific 11-10 in double overtime to capture it’s sixth straight NCAA title. In a contest for third place, St. Francis was blown out 17-2 by host Stanford.

Despite the abrupt end to their championship aspirations, St. Francis and their first-year coach, Srdjan Mihaljevic, compiled a season that any program in the East would be envious of. With a ninth-straight Northern Division title, a second straight Collegiate Water Polo Association Championship, a second straight NCAA tournament appearance, and a play-in round victory over UC San Diego, the Terriers (23-12) enjoyed a season to remember.

“Overall, the season was a success,” said Mihaljevic, who in 2013 delivered one of Eastern water polo’s most impressive coaching debuts. “We accomplished all our goals coming into the season. and played our best water polo when we needed to, which was when we won the Easterns [the Collegiate Water Polo Association Championship].”

The Terriers will say goodbye to their goalie Mladenovic, who must be in the conversation as one of St. Francis’ all-time greats. Senior center Bosko Stankovic will also be remembered as one of the key contributors to the class of 2014 that — by virtue of three NCAA appearances during their St. Francis tenure — is simply the greatest class in Terrier history. Marko Dzigurski, a valuable back-up to Stankovic, will also say graduate in 2014, as will Luka Vukomanovic and Tyler Perkins.

For Stankovic, who finished his the year with career bests in goals and assists, it’s a bittersweet end to a brilliant career. “There’s a bit of relief that I won’t have to spend four hours a day in the pool. But there’s also a bitter, sad taste.” said Stankovic, who like Mladenovic was selected to the Second Team of the 2013 NCAA All-Tournament Team.

“It occurred to me after the Stanford game: ‘You’re not going to be able to do this anymore,’” continued Stankovic. “I was a little sad… [but] I’m happy with four years, how I did.”