Council Members Past and Present Discuss Issues Then and Now

By Claude Scales on November 1, 2013 2:29 pm in Brooklyn History, Events, Government, Other Brooklyn 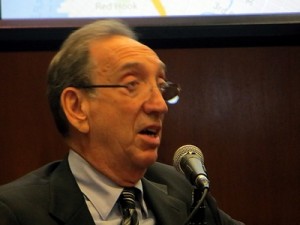 The moderator opened the discussion by asking each panelist what was the greatest problem facing the district during his term. Justice Gerges, who served on the Council from 1975 until 1991, when he resigned to accept appointment to the bench, said it was the availability of affordable housing. Later in the discussion, talking about the accomplishment of which he was proudest, he noted his role in opening communication and mitigating the hostility between the Orthodox Jewish and Hispanic communities in Williamsburg.

Mr. Fisher, who served from 1991 to 2001 and is now a corporate lawyer in private practice with a large law firm, described a District that had more than its share of problems when he took office, giving as examples his son’s having been offered crack in exchange for a vial of clean urine while walking through Cadman Plaza Park, and the discovery of an enormous underground oil contamination in Greenpoint. He said housing continued to be a major problem, and there is a need for increased density outside of landmarked districts like the Heights to provide more affordable places to live. The other panelists agreed with this.

Asked about his most gratifying accomplishment, Mr. Yassky, who succeeded Mr. Fisher, served on the Council until 2005, and is now the Commissioner and Chairman of the New York City Taxi and Limousine Commission, jokingly said “improving taxi service.” He said conditions in the District when he began his term on the Council had improved considerably from the time Mr. Fisher took office, but noted that the effects of gentrification had become an issue.

Mr. Levin said housing continues to be the principal issue for the District, but added that increased density would mean greater demand for schools and other public services. Looking to the future, he said that dealing with the effects of income disparity, and providing for the needs of the middle class, would be a major challenge for the City.

One fact noted in the discussion is that the boundaries of the District have shifted several times since 1975, and that, as it now stands, it is more ethnically and economically heterogeneous than it was before. The waterfront, however, has been a constant, and the panelists all lauded its redevelopment, including Brooklyn Bridge Park. Mr. Fisher said the nostalgia for a lost Brooklyn that prevailed when he took office has been replaced by pride in what Brooklyn has become and is continuing to become.