His comment reads: “Classless move. Came home to see that the ‘Boardwalk Empire’ production team left their sh*t on the footpath and road in front of my apartment after they left from

filming. Next time you want to film in Brooklyn Heights, expect someone to be out there with an air horn. This isn’t Manhattan with crap all over the place; we care what our streets look like.”

But LOC2013, a staffer with the production company, took issue, posting: “This report isn’t exactly true. Catering was held on Henry Street around 4-5 p.m. (Wednesday), and our trash vendor came as he does every day to take away all of our trash. It is true there was a pile of trash left on the side of the street for a few hours until (they picked) it up, but we would 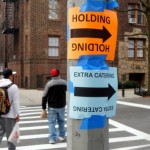 never abandon our trash and not take care of it.”

Collins then responded: “Uhm, catering between 4-5 p.m? Then who was serving breakfast to the crew at 9 a.m.? Boxes started piling up in the morning and this photo was taken at 6 p.m. after your crew drove away. Saying it was only there for a few hours is BS. At 9 p.m. when I came home from walking the dog it was still there. As you (and others) choose to use this location for staging on a regular basis, maybe more effort could be made. Or are you saying 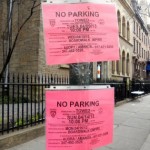 the way it was stacked with boxes spilling onto the road all day was appropriate?”

And it keeps getting better! LOC2013 then attempted to diffuse the tif, adding: “We wait until the end of our day so our trash vendor can pick up all trash generated by our crew. Not just catering, but also at our film location. Please feel free to call our office at 917-671-5250 if you would like to discuss it further.”

And finally, Collins: “If you think it’s appropriate…. then nothing to further discuss.”

Other choice comments in the thread include:
* “Starting to get tired of this sh*t. Somebody explain to me what this adds to the neighborhood?”
* “Call the phone number on the posted filming notices and demand that they clean up their mess.”