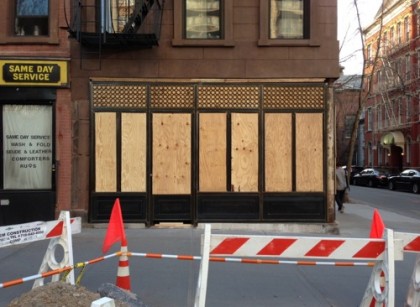 Ok, so we’ve known that something was happening at 72 Henry Street after Diva Salon moved down the street and expanded at 60 Henry (former home of the cursed Oven backintheday). Nabe chatter had the spot becoming an Italian restaurant run by the building’s landlord.

But the lede in today’s Brownstoner report for Heights residents is not necessarily some new tidbits about what’s to come in that location. Behold:

Brownstoner: Looks like a new restaurant or bar is moving into the empty space at 72 Henry in Brooklyn Heights, previously home to Diva Salon. So far, the new exterior is looking very spif. The application for a liquor license posted in the window ID’s the owner of the new business as Sociale LLC. With all the new amenities in the area these days (including further down on Atlantic), maybe Brooklyn Heights will have to shed some of its fuddy-duddy image?