War Of The Worlds: Robot Lands On Promenade… Danger, Will Robinson!

Late Friday afternoon, amid a flurry of locals, tourists, kids on bikes and dog walkers, a horrifying sight descended upon the Brooklyn Heights Promenade. Preceding a blinding flash of light, a menacing robot appeared near the Montague Street entrance. Despite suffering potential harm from the being’s ionized pulse gun, your BHB correspondent bravely approached the man from another planet… as his eyes lit up with horrifying intensity. I was afraid. Truly afraid.

Thankfully, before I was beamed into oblivion by the robot’s ion cannon, NYC sketch comedy troupe Dinner For One (a.k.a. dfor1.com) came to my rescue (A sample of their work is embedded above). The guys, who comprise New York-based graduates of Boston’s Emerson College… actors, writers, filmmakers, sound designers and directors… shared that they’re filming a sketch on the Promenade that offers an other-worldly take on HBO’s “Girls,” starring Brooklyn Heights heroine Lena Dunham, an esteemed member of the BHB Ten 2012.

Who knows exactly what any of this means… although when I noted, “There has to be a naked robot, then,” they assured that robotic sex scenes would be included.  Dfor1 will post the completed work later this month. 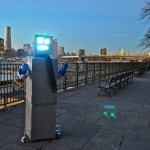 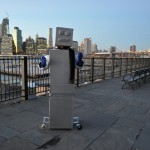 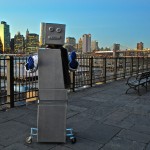 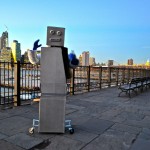