Flickr user Dblack as well as Filming in Brooklyn were on the scene today at Cadman Plaza Park as Alec Baldwin and Salma Hayek shot scenes for an upcoming episode of NBC’s 30 Rock. 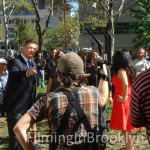 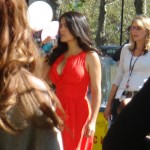 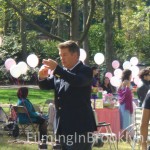 Filming in Brooklyn: Once shooting started the paparazzi started jockying for position.  I’ve never stood with them before and soon realized that it was a blood sport.  Each time one got in a good position another one would get in front of that one.  There was pushing and shoving and two guys almost came to blows.  The phrase “Don’t fuck with me man!” was uttered right before someone from the show came over and told them all to cool it, that they were distracting the actors.

BHA to Diesel Circus: You Kids Get Off My Lawn!
Rock n Roll Circus Schedule