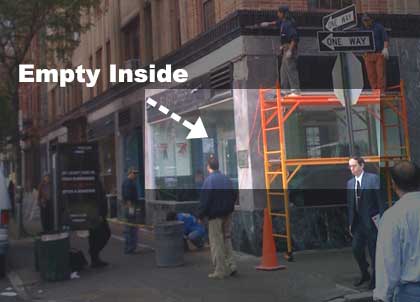 As BHB Community member “Yo” pointed out yesterday, there’s something going on at the site formerly known as Busy Chef at 60 Henry Street.   There also seems to be activity at the old Wine Bar space at 50 Henry Street.  BHB regular nabeguy commented yesterday, “I also saw the activity in the Wine Bar space. I presumed that the broker-type was Alan Young spinning his web, but may be wrong. When I asked the guy who’s been watching the places lately if something was moving in, the question was met with a blank stare.”

Busy Chef, the Wine Bar at 50 Henry and Oven were all shut down over the summer after one of its employees Dan Kaufman was arrested and charged with several counts including identity theft related to credit card fraud. The case is currently before a Brooklyn Grand Jury.