Long before there was a Housing Works Thrift Shop or a Fish’s Eddy—or for that matter, a Brooklyn Heights Promenade—122 Montague Street was the location of beloved Southern-style restaurant Mammy’s Pantry. In the 1940s, the eatery served up a lunch and dinner menu of such goodies as Maryland Crab Cakes, Southern Fried Chicken, Shrimps Creole and Chesapeake Bay Oysters.

For desert, one could order homemade cakes and pies, Mammy’s Pastries, Bittersweet Chocolates, Jams & Jellies or its renowned Cobbler. Wash it all down with generous juleps, swizzlers, fizzes, wine or cocktails from the bar.

Mammy’s, which endured at least from 1941 to 1947, was owned by “Mrs. Christine Heinemann, a grand cook from Virginia,” according to a column in November 1944 from Gourmet magazine “Food Flashes” columnist Clementine Paddleford. Its manager was a Brooklyn Heights resident, Ruth Wagner. Paddleford called Mammy’s “one of the city’s beloved of the home-style restaurants.”

An ad in the January 17, 1941 Brooklyn Eagle, promotes Mammy’s as “a delightful place to enjoy a meal. Dine in the Brooklyn Heights Room or the more formal Old Dominion Room.” Sunday dinner was served from 12:30 to 8 p.m., for 70 cents to 95 cents. Virginia breakfast was available Sunday mornings for 50 cents.

The precious two-fold linen postcard for Mammy’s Pantry also reveals a lot about the eatery, including air conditioning, music by MUSAK and its telephone exchange: MAin 4-4446 and 4-9365. It also boasts an illustration of “Mammy” that would be anything but politically correct today, although at the time it represented Southern hospitality and cuisine.

A handy color map of the neighborhood, with “a chart to find your way around,” offers historical markers of Brooklyn Heights, including: “Here was the Ferry to Wall Street,” “Blare Edwin Booth stayed,” “Tom Paine’s house” and “Here Beecher auctioned Sarah the Negro slave.” The map also reveals a pre-Cadman Plaza Park and pre-Promenade Heights (the latter would be dedicated in 1950).

Mammy’s was apparently more than an eatery enjoyed by Brooklyn Heights locals. In Paddleford’s Gourmet column in November 1944 , she wrote about World War II’s rationing of bread ingredients, and welcomed the return to Mammy’s menu of “Brooklyn’s famous orange bread, a war casualty for months.”

Paddleford said, “It’s a bread dark as fruit cake. It has an orange peel tang for the palate, made as it is with the whole oranges (minus their seeds) put through the food chopper. Raisins are added to the pulp, and pecans coarsely cut. White flour goes in, whole eggs and seasonings. The oranges are shipped direct from a Florida grove, the pecans come from a grower in Georgia, and the baking is supervised by Mrs. Heinemann. But the recipe is Northern, from a farm woman in upstate New York. The little 35-cent loaf will cut 10 to 12 slices, depending entirely on the sharpness of the knife. The bread needs only the thinnest streak of butter to be the last word with tea. Or use it with cream cheese. It is as fragrant as a pomander, the flavor truly orange.” She adds that “the women who shop after luncheon at (Mammy’s) retail bread case say, ‘Good to see the bread back again.’”

Meanwhile, the building at 122 Montague Street was constructed in 1900, according to various city records, stands five stories tall, and includes three residential rentals, as it has throughout much of its history. In 1976, according to the Montague Street Revitalization plan, it housed Piccadeli Restaurant, which offered table service, a bar and take out. From that point, it is unclear what occupied the space until around 2007, with the short-lived Fish’s Eddy and its current tenant Housing Works. Various websites refer to The Montage Street News and Montague Street Saloon at 122 Montague Street, but seem uncertain.

For sure, there are numerous long-time residents of Brooklyn Heights who have their own memories of Mammy’s Pantry. Please… serve ’em up! 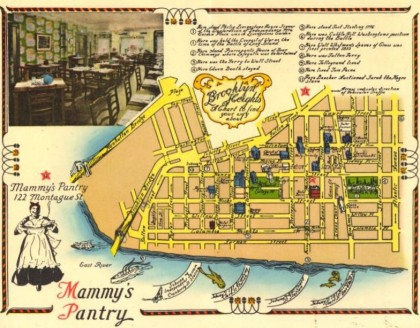 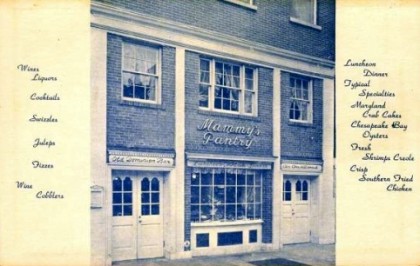 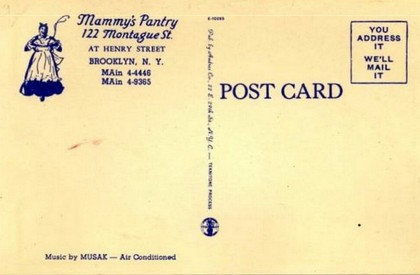 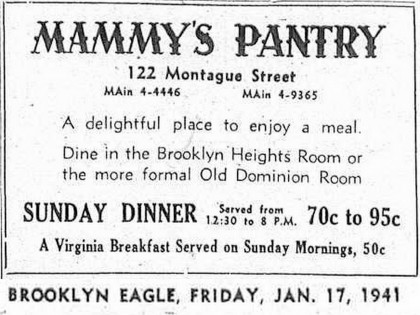 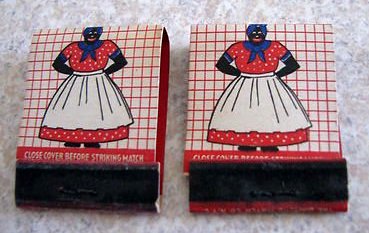 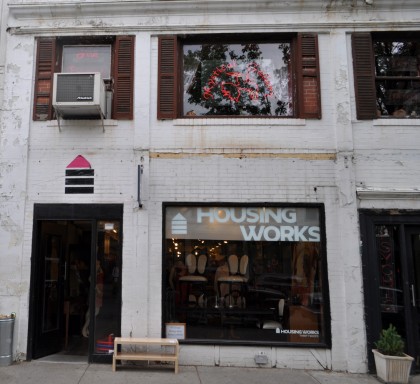