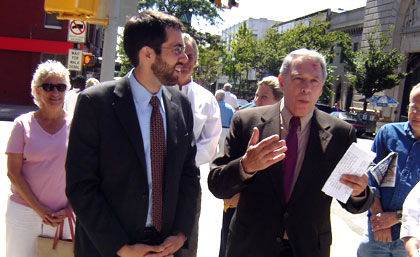 Brooklyn Heights super-commenter/attorney TK Small and his assistant Leroy Martinez attended Ken Diamondstone’s press conference on Court Street and Atlantic Avenue this afternoon exclusively for BHB.  They snapped a photo and provided us with the official press release detailing Diamondstone’s backing of Daniel Squadron in the Democratic State Senate primary (aka The Bid for the Twenty Fifth) on September 9.  Two years ago, Diamondstone failed in his eerily similar attempt to unseat incumbent Sen. Martin Connor.

At the beginning of  this campaign, I sat down with Dan and posed him a tough challenge.  I told him that his determination to take on a lumbering dinosaur like Marty Connor wasn’t enough to win my endorsement.  I challenged him to prove the substance of his words taking up the mantle of the fight I began in 2006 against Connor and to demonstrate to the people of our district that he wouldn’t be yet another elected official who let us down.

Dan has risen to my challenge.  He has shown a gift for uniting diverse people and opinions and honing these invaluable perspectives into a single powerful voice . In this way he emulates a leader who has inspired me to continue my struggle to build a better society: Senator Barack Obama. [Diamondstone Press release PDF (Adobe Acrobat Reader required)]

Whose side are you on? Vote in the BHB Poll now!

Chef of the Flies
Pop Up Park Extended