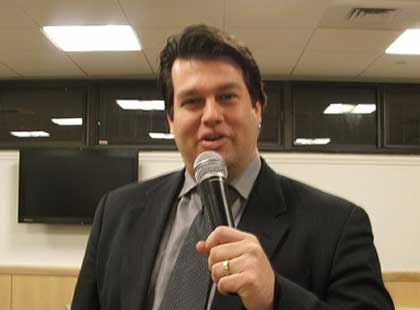 The New York Observer reports today that the spokesman for State Senator Martin Connor’s re-election bid has “terminated” his relationship with the campaign.   The Public Advocacy Group president Chad Marlow made his mark in the race for the 25th State Senate District via attacks on opponent Daniel Squadron.  He stayed on offense against “Kid” Squadron (and his family’s wealth) to the end.   In his farewell press release, Marlow included this thinly veiled reference to Connor’s nemesis: “There is… an artificial aristocracy founded on wealth and birth, without either virtue or talents… The artificial aristocracy is a mischievous ingredient in government, and provision should be made to prevent its ascendancy.” (In any event, Marlow is now free to go back to representing pedicab owners.)

This kind of abrupt change usually doesn’t happen when everything is going well, but it’s too early to say how it actually affects the campaign of an incumbent who, often, is his own spokesman.

Connor campaign Political Director Mike Barfield tells BHB,  “Mr. Marlow remains a friend of the campaign and we appreciate his effusive support of Senator Connor in both the statement he released earlier today and our conversations thereafter. We both agree Senator Connor is the truly progressive candidate in this primary who will best serve the residents of the 25th District in Albany.”

Last week,  Newsday and some local residents speculated about a so-called “push poll” being conducted in this race in Brooklyn Heights.  BHB received denials of involvement from all of the 25th District campaigns. As for anyone thinking that Marlow’s departure may be related to the polling, which Connor called “unethical”, Barfield says, “Neither Chad Marlow, our campaign, nor any of our vendors conducted the push poll in Brooklyn Heights. Once again, I think voters and members of the media should ask themselves who benefits from a negative push poll about Senator Connor. Marty, or his opponent? The record from you own blog shows that the Squadron campaign did not deny the poll.”

Sen. Connor will be a guest on the Homer Fink Show live on BHB at 4pm this Friday (8/15) and will be taking your phone calls.