Marty Gives Himself a Bonus and the Kid Calls Shenanigans 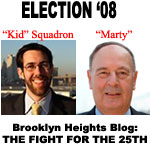 NY State Senator Martin “Marty” Connor, our man in Albany, is backing legislation that would put an extra $52,000 in the pockets of lawmakers who agree to do their jobs full-time.   Connor had an extra curricular income of $350,000 in 2002.  The NY Post says Connor claims that was for about “100 hours” of work.

Needless to say, Daniel “the Kid” Squadron,  Connor’s opponent for the Democratic nomination in the September primary (and on the November ballot regardless via the Working Families Party) is outraged by Marty’s scheme.

Squadron tells the NY Post, “While Marty Connor clearly believes he should get an additional $52,000 bonus just for doing the job he was elected to do, in these economic times, he’d be hard-pressed to find a single New Yorker who agrees.. It’s these sorts of self-serving ideas that are exactly what’s wrong with Albany.”

The Connor campaign has again and again launched negative personal attacks.  They’ve tried to dismiss our grassroots race, calling Daniel a “kid” and  “the guy who cleaned Michelangelo’s brushes” (whatever that means). They’ve attacked Daniel by going after his family, going after our campaign’s legion of supporters, and even going after Daniel’s extra-curricular activities in college (directing a play)!

Today, the mud didn’t stop — even at an event where Connor was endorsed by 5 members of congress, led by Rep. Jerry Nadler who had some thoughts about Sen. Chuck Schumer’s endorsement of Squadron:

New York Observer: Nadler…: “Well, Chuck is entitled to put considerations of personal friendship over everything else that we have talked about, and he’s said that’s exactly what he has done. Marty’s opponent worked for Chuck, is the co-author of his book with him, and I understand a personal loyalty,” Nadler said.

“Chuck also said that Marty didn’t support him in the primary 15, 10 years ago. He’s entitled to make endorsements on the basis he wishes. But I think we’re making an endorsement, not on the basis of [who] supported whom ten years ago, or who worked for who, or who is a personal friend, but who we believe is the most progressive, and the most activist, most effective senator for this district.”

aug4video from Azi Paybarah on Vimeo.