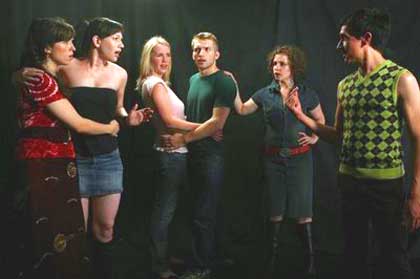 Join Homer and his guests, the cast of The Boy in the Basement- the Live Action Romance novel playing at this year’s NYC Fringe Festival.  Listen to the podcast now!

The show will be at the SoHo Playhouse:15 Vandam Street (between 6th Avenue & Varick / 7th Avenue)

THE BOY IN THE BASEMENT is a live action romance novel about four co-eds who find a striking stranger trying to rob their house. His punishment? One weekend in the basement- as their sex slave. But see what happens when Lance Speedworth breaks into their home… and steals their hearts.

Written originally as a book six years ago as a gift to her three college housemates (on whom the story is loosely based), author and Brooklyn resident Katharine Heller then self published The Boy in the Basement as a novel. Two years, many revisions and a huge audience following later, THE BOY IN THE BASEMENT has been adapted into an hour long play.

the boy in the basement, the homer fink show