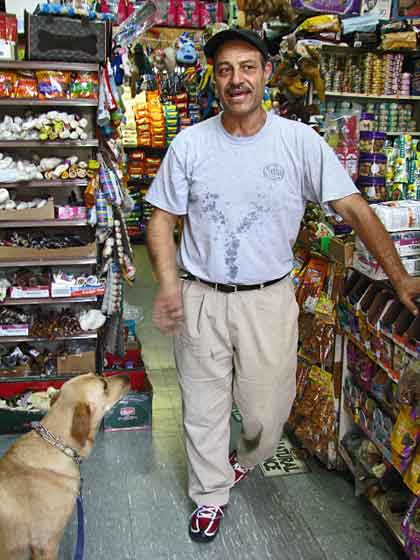 As we all know, NYCPet is stocking their shelves on Clark Street for an August opening. With four other pet stores within a four-block radius, I wondered if owners are nervous about the competition.

When I’m hunting for just the right dog gift, I often find myself at rowf, four-and-a-half blocks away from NYCPets, on Middagh Street. rowf has the airy deliberate quality of a SoHo designer store, with a photo board of their canine customers, a bowl of water near the door and a treat-of-the-day (some kind of dried fish on Sunday, something I couldn’t snap in half for Hermia and Daisy on Tuesday) on the counter. The shelves feature a few bags of kibble but a broad range of leashes and collars. Yuning, the proprietress, expresses little concern for the new store, secure in the specific niche she has created for herself, her caramel spaniel and gray poodle, who bark a welcome at passers-by. As Yuning squatted to pet Daisy, she said, “We specialize in treats and toys,” and the matter was closed.

Pet Emporium’s legendary Sammi, for 18 years the de facto mayor of Montague Street, gave his famous shrug when I asked him about it. “What can you do?” he said resignedly. “Competition is good for everybody. I wish them the best of luck.”

“Are you concerned?” I asked.

“Of course. They’re going to take some of my business away. But some customers will be loyal. I wish them the best of luck.”

“Some” customers will be loyal to Sammi because he’s a good friend and neighbor. If I need to leave keys or a business card for someone, Sammi is happy to play postmaster. Because Bangor is obsessed with one kind of ball, Sammi keeps them in stock. When I’m having a bad dog day, I find myself telling him about it and being absolved. “Sometimes it’s like that,” he shrugs. “What can you do? But you’re a wonderful dog walker. Don’t take it so hard.” Then we try to top each other with jokes involving his products (think fetch; think pizzle sticks) and I’m on my way, feeling better.

Beyond his generosity and presence, Sammi is probably the most beloved human in Brooklyn Heights. Most of the neighborhood dogs know he’s lavish with treats and he’s unflappable when a dog jumps on the counter or knocks over a display of Cod Chews or tennis balls. Daisy, Bangor and Hermia stop at the corner of Hicks and Montague and plant themselves, panting in his direction. Sammi is the only pet store owner they know by name.

When I spout my fondness for Sammi to Tom, the co-owner of Perfect Paws, he agrees whole-heartedly. If Sammi doesn’t toot his own horn, Tom toots his and everyone else’s. “When I was broke, Sammi would float me a bag of kibble and tell me to pay him next week. And he never hounded me about it,” he recalls of years gone by. Perfect Paws has been a decorative feature on Hicks Street for four years and, before that, for 13 years on Atlantic Avenue.

“NYCPets isn’t going to affect me or Serena (the owner of The Tailored Pet, on Pineapple Walk). We rely on grooming and boarding as much as retail. The rumor is, though, that they haven’t been very cool about cooperating with BARC in Williamsburg.” BARC [Brooklyn Animal Resource Coalition] is a not-for-profit, no-kill shelter on Wythe Avenue, where somewhat higher kibble prices generate revenue to support the maintenance of the kennel facility. BARC has also been the recipient of the profits from the Brooklyn Heights dog Halloween Parade, an annual fundraising event that originated with Perfects Paws’s desire to help animals displaced by Hurricane Kathrina. The parade is supported by Friends of Hillside Park, Pet Emporium and other vendors. Perfect Paws is a community resource for local fundraising.

“We donate to the neighborhood schools and synagogues, and we don’t take administrative fees out for our work on the Parade. We have a deal with BARC: adopt a dog, we’ll give it its first grooming for free and Sammi kicks in the first bag of kibble for free. It’s important that you give back to the community that’s paying you,” Tom says as a bulldog pushes to the gate at the counter and starts baying at something above its nose.

“Aw, Agnes,” Tom sighs. “Are you seeing ghosts again?” Daisy takes Agnes’s vocalization as a challenge and starts to bark as well. “Shut up, Agnes, or I’ll hit you with my rubber slipper,” he threatens, waving his flip-flop around. He turns back and says, “I did that once and she snatched it and ran away. Daisy, you are going to have the runs all week,” he adds as my dog settles in to eat her third rawhide curly.

Tom is the person many of us go to before the veterinarian. Having worked for many years as a vet tech, he’s calmed us down when we’re distraught, taught us to treat our dogs’ wounds, and given out training advice.

Serena, the owner of The Tailored Pet, thinks the incursion of a franchise pet store is “silly”. After admiring Bangor as the prettiest chocolate Lab she’s seen, she leaned over the counter and told me how she heard of the new store. “I call them the `crepe hangers’ – the customers who come in and say, `Did you hear…’ There’s always going to be gossip, always going to be factions, but I’ve been here for 35 years,” she says. “I got nervous when Sammi opened up his store. I don’t get nervous any more.”

I remark that it looks like Pet Emporium is going to be the most affected and she nods sadly. “The location is smart, right off the train, and Gristides is closed. It’s on the way home for a lot of people.”

The location is also expensive. The rents I heard were around $12,500 a month, which is a lot of Wellness and Greenies to sell.

Word is making the rounds that the personnel aren’t very friendly. One Labrador-owning friend told me of friend’s encounter. “He stopped in to say hello and the guy said, `We’re not open,’ and shut the door on him.”

Lately, Brooklyn Heights Blog has been full of woe at the mortality rate of mom-and-pop businesses and the drain on the character and variety of the neighborhood that goes along with it. It’s as much our fault as it is bad business and high rents, and it’s got me thinking about how the pet stores are a reliable part of the fabric of my days. At least once a month, I carry Hermia’s prong collar to Sammi when it’s been turned into one of those Chinese finger-lock puzzles and how he let me take a couple of pizzle sticks when I had two Labs to entertain while I administered an I.V. to a cat. Daisy goes batshit for joy when she sees Sammi’s son out on a delivery or hears Sammi’s voice on the street.

Allen, a terrified former shelter dog on my roster, allows exactly four people in the world to pick him up – his humans, me, and Tom. Daisy and Bangor find Tom as hugely funny as I do. Bangor hates cats but calls a truce in Perfect Paws and The Tailored Pet. I found the perfect going-away present for Mully when she moved to New Jersey among the New York-centric toys at rowf.

I know who will be behind the counter when I walk into Pet Emporium or rowf – and so do my dogs. We know she or he will know our names. I got sucked into helping with the parade while talking to Tom about NYCPets and referred his co-owner, Aaron, to Overtures for advice on getting paint that won’t fade in window dressings. The business of pets – and especially of dogs, the most public of pets – is very small, very internecine – and extremely passionate. NYC Pets has big footprints to filll and some people might stop for kibble on their way home from work, but I wonder where they’ll go when Bowser eats too many rawhide curlies or the Big Red Puppy is so hyper that his humans can’t read the morning paper. I want to know the salesperson is going to come out from behind the register not to promote the genius of a Cuz, but to rough up my dog just the way she likes. I want to be looked in the eye and, even more, I want Daisy to be looked in the eye and I want her to smile at the jolt of contact.

I already know where I can find I.D. and Kongs: they’re just the excuses.

NYCPets is two half-blocks away from my apartment. Sure, I can whip in to buy a bag of kibble, but I’m a lot more mindful that in doing so, I’ll be selling out the neighborhood.