The Sharks and the Jets: Part II

A couple of times a week I meet a new dog and fall into conversation with its owner. We can do this because our dogs have decided to tolerate each other and so, inevitably, our conversation turns to our dogs’ Dark Sides. If we venture into our dogs reactions to strangers, I lower my voice and look carefully around before admitting, “Daisy doesn’t like Black people.” 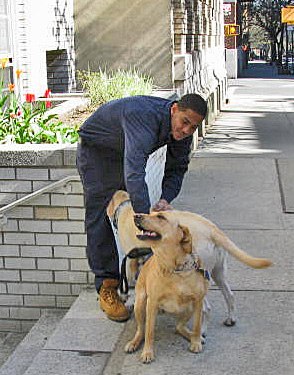 I have never made this admission without hearing similar prejudices in the other dog. We are ashamed, chagrined and frightened by our dogs’ attitudes. We didn’t teach them to fear particular demographics, and more often than not we have friends within the very groups our dogs love to hate.

In my Lab world, I have heard or encountered problems with Middle Easterners, policemen, the Aged, people using walkers, canes, crutches, wheelchairs and scooters, anyone who swings their arms too wildly (joggers, tai chi practitioners), the mentally impaired and, almost always, African Americans.

“Why do you think that is?” we ask each other. Sometimes the answers are fairly obvious. Those swinging arms and canes look too much like punishment about to happen. Dogs have strong ideas of what humans should be: two-legged, animate, inter-social. People talking to themselves don’t make sense, and cops tend to stand around too much. The person leaning against a wall and talking on her cell phone at night is highly suspicious.

But why do they take such exception to other folks?

Theories abound, some of them too obnoxious to repeat. One assumption is that dogs sense or smell fear. If a dog can smell an epileptic fit coming on, it’s not impossible that fear also has a scent. Fight or flight is a primal instinct in dogs. They differ from wolves by two-tenths in their genetic make-up. “Fight” is natural. That vulpine similarity could also account for dogs’ umbrage with the elderly, prodding them to go after the weakest members of the herd – although it doesn’t leave room for Labs’ love of children, who would also be easy prey.

I’m skeptical. Not all Africans are scared of dogs and plenty of terrified white people pass dogs without being barked or lunged at.

I’ve worked with Daisy, explaining to people I think I can trust that she is biased. I ask if I can pat them on the arm, call them by name, and stand by their side so that she understands I’m not afraid. Sometimes it works, especially if there’s no other commotion feeding her already heightened energy.

The doormen of the Heights have been invaluable partners because most of her objections are to men. Ah men! – too often afraid to show “feminine” emotions in public. That was my light bulb moment: given a dog’s ability to interpret human faces and their different color spectrum, a human without affect that she can’t see well might very well scare Daisy. And scared dogs are wolves.

The elderly, too, tend to have a set expression, their faces drawn into severity by time and gravity. To a dog that is sensitive enough to run across Hillside Park at the lift of my eyebrows, the inability to read whether the Battle of the Bulge vet is also bewildering.

But the person who talks back to Daisy often becomes one of her beloveds. My neighbor finally did this, saying loudly and jokingly, “Oh, Daisy, don’t give me that shit. I don’t believe you any more!” Calling her by name, the note of warmth in her voice and the smile on her face stopped Daisy cold and they’ve been friends ever since.

And when a welcome is offered – vibrantly, consistently and charmingly – she wags her whole body and hurtles herself into the game of love.

BHB columnist Frances Kuffel has lived in the Heights for twenty years. Her dog walking clients include Allen, Bangor, Chadow, Hope, Hermia, Lex, Malfoy, Mildred, Orson, Otto, Pepe and Pickering. Barley and Zanzibar have gone to a Better Place. If we’re very good people, we might be allowed to dance with them again. For more information, visit http//franceskuffel.net, http://caronthehill.blogspot.com, or http://www.flickr.com/photos/kuffelscrapbook.

She is the author of Passing for Thin