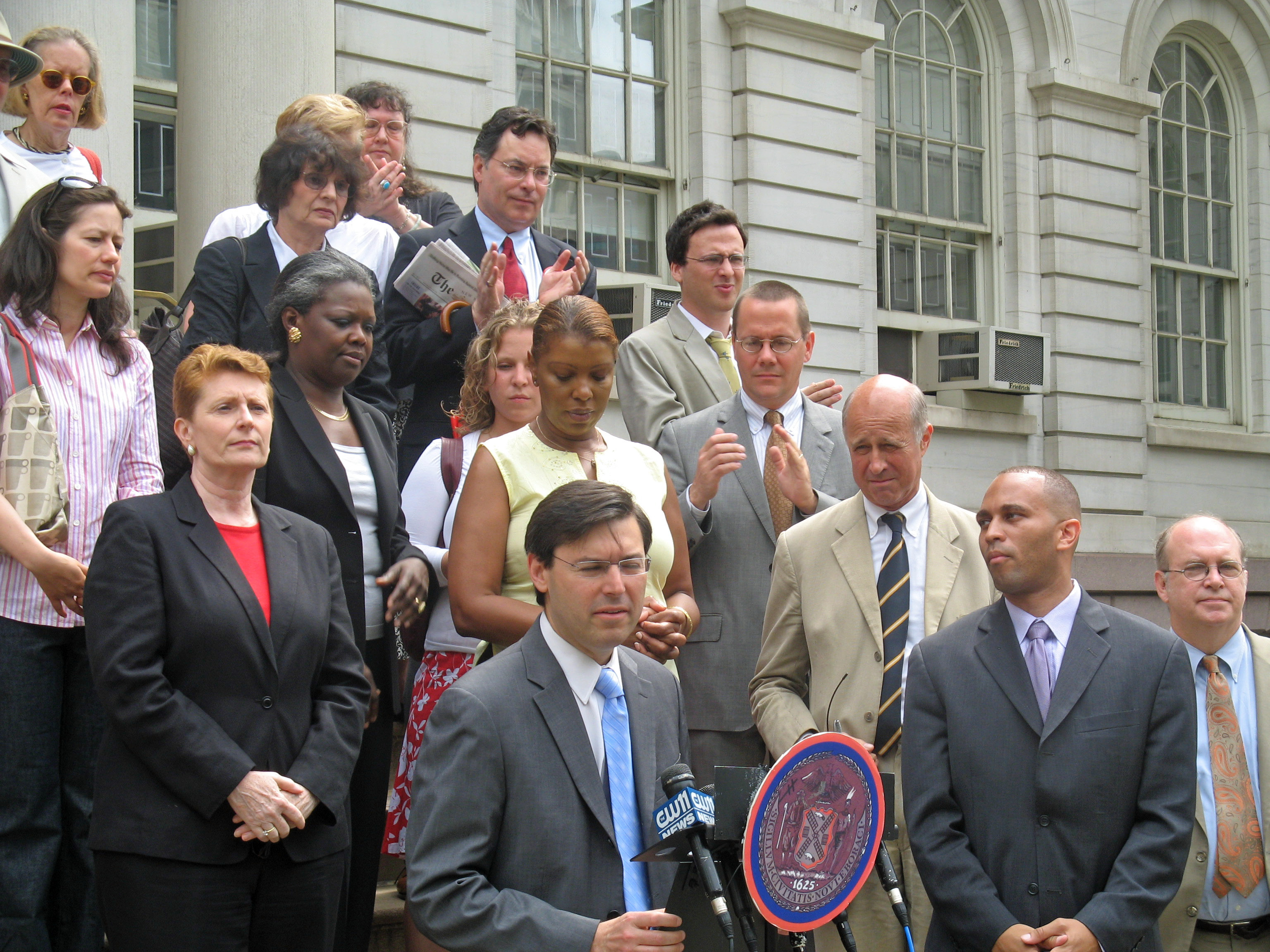 This morning, a press conference was held on the City Hall steps to announce the introduction at the State Assembly of a bill titled the Atlantic Yards Governance Act. If enacted, this bill would establish a new entity called the Atlantic Yards Development Trust, which would have the power to supervise the developer’s implementation of design guidelines, coordinate the responses of city and state agencies to environmental concerns, oversee the development of policy affecting the project, and approve, disapprove or modify any proposed changes to the project. The bill is sponsored by Assemblyman Hakeem Jeffries (second from right in photo above) and co-sponsored by Assemblyman James F. Brennan (far right in photo) and Assemblywoman Joan L. Millman, whose district includes the Heights. Among those speaking in favor of the bill at the press conference was City Councilman David Yassky (at podium in photo), who noted that $55 million in public funds has already been disbursed to the developer, Forest City Ratner, without any conditions or meaningful public oversight. Yassky opined that, although there are many problems with the project as proposed and approved, including the height and bulk of some buildings, some core of good can be salvaged from it.

Assemblywoman Millman could not be present for the press conference, however, State Democratic District Leader for the 52nd Assembly District (Millman’s) Jo Anne Simon (to the left of Yassky in photo) was there, and spoke in favor of the bill. She strongly criticized the lack of transparency and of meaningful public participation in the process of reviewing, approving and funding Atlantic Yards. She noted that the bill would provide a forum for “all of the stakeholders, not just a pre-selected few.”

Others speaking in favor of the bill included: Assemblyman Brennan, Councilwoman Letitia James (behind Yassky in photo) and Kent Barwick, President of the Municipal Art Society (third from right in photo).

During the question and answer period following the speakers’ presentations, some skepticism was expressed concerning the bill’s possible efficacy in preventing adverse impact of Atlantic Yards on affected communities. Susan Metz, a community activist from Prospect Heights, the neighborhood most directly affected by the project, noted her continued opposition to the project continuing at all as planned. Judy Stanton, Executive Director of the Brooklyn Heights Association (top left in photo) afterward expressed the Association’s support for the bill, which she said would improve oversight of the project and make the developer more accountable to the concerns of the public.