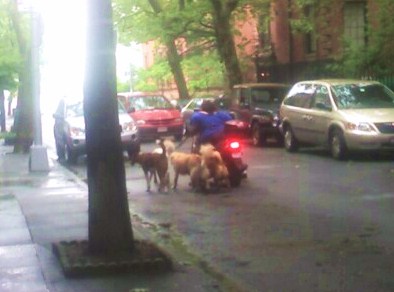 A BHB tipster sends in this photo and observation:

There’s a nabe dog walker who consistently puts her charges in danger by “walking” the dogs while she rides on her Vespa scooter. Here’s a photo snapped this morning.

A few things to point out about the photo:

This week I saw something somewhat bizarre. The heavyset woman who walks dogs in the neighborhood was doing so while slowly rolling up Pierrepont street on her scooter. I only saw her do this for 20 or 30 feet, but quickly cars were accumulating behind her. I come from a cat loving family so I am not sure whether this would be considered good practice.

Is this all that dangerous? (Update: The NY Times wrote about Brooklyn Heights dogs walkers in 2002)

Open Thread Wednesday 5/28/08
Us Versus Them