In the latest installment of Confessions of a Lab Lady, Frances Kuffel tackles the issue of random food left out on the street causing problems with pooches: 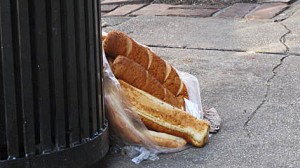 It’s quite the picnic that Brooklyn Heights is providing for the dogs, rats, pigeons and street cleaners. I can almost understand being drunk or tired and dropping the bag of your leftover eats because there’s no trash basket nearby, but I am livid at what I’ve had to steer dogs past in the last twenty-four hours.

It started with a bag of hero bread leaning against a trash barrel in front of the Subway store on Montague Street on Sunday morning. I realize it’s probably technically illegal for a store to use the public waste baskets, and it’s probably against company policy to keep the unused bread in the shop overnight, but the irony – and Zanzibar’s magnetic pull to it – is beyond comprehension.

I’m typing this with barbecue sauce under my fingernails because at 7:05 this morning Daisy ducked and came up looking like Pan with half a rack of pork ribs sticking out of her mouth. I’ve renamed Clark Street between Hicks and Henry Take-Out Turnpike for its wealth of noodles and muffin wrappers and, now, ribs. Henry Street north of Clark has become Pizza Place in my canine lexicon, and Montague is Bagel Boulevard. The area is rife with trash receptacles.

As is Montague Streets, where they’re at every corner and at each half-block. The three-quarters of a six or seven-layer yellow cake with chocolate frosting on top of a trash bag leaning against a tree on Montague, vaguely between Banana Republic and Heights Cleaners looked something I would have loved to chow down on this morning. The difference is that it might have given me a bellyache but the chocolate would have poisoned Zanzibar.

I am ashamed when I see poop on the street – it reflects badly on every dog owner and walker, and if I can pick up a trail of a dog’s doo when I’ve got 280 pounds of willful muscle straining to get to the tree a squirrel just ran up, anyone can do it. At best, dog poop is an inconvenience and at worst it’s a hazard when you’re walking a poop-eating dog. It’s a discreet menace, affecting shoes and misguided dogs, whereas ribs, cake, muffin wrappers, bread, French fries and potato chips attract vermin, are a trip to the vet for dogs, and to the chiropractor or orthopedist for the walkers who are lurched backwards, sideways and upside down by the dogs’ eagerness to retrieve them. My shoulders are a mess, I’ve been bloodied over turkey legs, and my fingernails harbor dinner for four.

In the interests of fairness, I counted the dog piles between Zanzibar’s house and mine this morning, the stretch of Hicks between Pierrpont and Clark. Seven dried up messes that were hard to tell apart from the graying blossoms and miscellaneous tree branches the storms have dropped on us. The dogs aren’t at fault for our streets’ disgusting amount of shit, their tenders are. And between piles of human indifference, there was also one nice group of chicken bones waiting to pierce a Corgi’s gut.

You tell me who the primitives are.

La Dolce Doggie Or Isn’t That Really Dangerous?
BHA’s Judy: Landmarks Could Have Worked Harder to Save 100 Clark