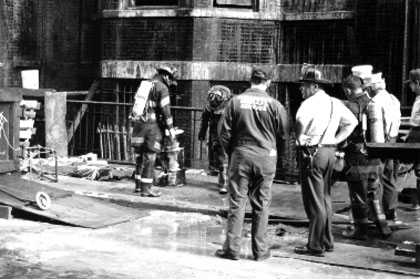 Long time Brooklyn Heights resident Andrew Porter sent in these photos, from the late 70s, taken while 60 Pineapple Street was undergoing renovations. He shares this anecdote:

[Here are photos of] 60 Pineapple Street, back when it was being redeveloped, having been a closed down part of the St. George Hotel for decades. These photos, taken in the late 1970s, shows when the contractor managed to upset an entire barrel of sulphuric acid, which was being used to remove the paint from the surface of the building. Rather than call the fire department to close the street because people were walking through, and cars were driving through, pure acid, the contractor did nothing. I took these photos after calling the FDNY, which then hosed the area down for half an hour. For decades, 60 Pineapple had been an eyesore, with the brick painted black, the lintels painted white, the windows painted over. When uncovered, the brick was a glorious golden red. 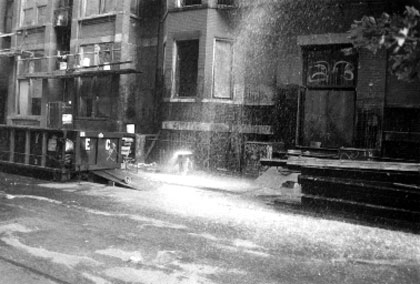