Signs have been posted around Brooklyn Heights by the NYPD seeking the community’s help in finding the two perpetrators involved in the August shooting at 101 Clark Street.

The posters also officially identify the victim as 28 year old Hunter Metrick and confirm that he later died of his wounds. Metrick’s name had not been released until this point.

According to published reports, before his death Metrick refused to cooperate with police in their investigation.

Crime Stoppers will pay up to $2000 cash for information leading to the arrest and indictment of the person(s) responsible for the following crime(s). 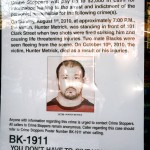 Royal Rendezvous: Fireworks for the Three Queens at Statue of Liberty
Friends With Kids Filming with Ed Burns (no Jon Hamm?)