Details on Shooting at 101 Clark Street in Brooklyn Heights 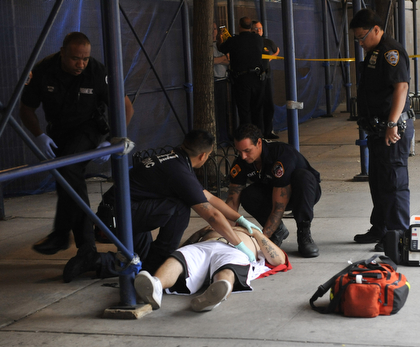 Shots rang out in front of 101 Clark St. just before 7:00 p.m., leaving a man wounded on the sidewalk. The victim, a resident of the building, was hit twice in the back, and is recovering at Bellevue Hospital.

“I heard the shots and I looked over and I saw this young kid with a gun, and shoot it again, and then ran off,” said one witness.

Other witnesses said there were two men, one of whom was carrying a backpack. Both fled east on Clark St., where one jumped in to a red SUV.

Meanwhile, neighbors attempted to render aid to the victim.

“He was moaning and saying that he couldn’t move. Then we went over to him and asked him if he had been shot and he said he didn’t know, he thought so,” said one resident of the building. “We asked him if he was in pain, he said ‘yes,’ he said he couldn’t move. At some point, somebody moved him somewhat, and we were able to see that he was bleeding.”

A woman identified as the victim’s mother appeared on the street shortly after the incident, crying out “my son! My son!” She rode in another ambulance and followed her son to the hospital.

The incident shocked the normally peaceful block. “I’m shaking. I have to admit that until I actually saw the blood, I was maybe a little…not believing it was real, but then once I saw it I really started to feel very shaky, and this is totally out of keeping with this building, with this neighborhood, it’s not at all what you would expect here,” said the witness.