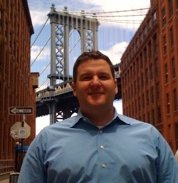 You know you’re in Brooklyn, or more specifically in DUMBO, when the conference room at a hugely successful digital marketing and advertising firm is nicknamed “The Dude,” after Jeff Bridges’s immortal character in “The Big Lebowski.”

Pontiflex co-Founder and CEO Zephrin Lasker, 38,  exudes a similarly laid back vibe. Seated at The Dude’s conference table (bought on Craigslist), he seems at peace in their DUMBO office, which is essentially one large, white-walled room that glimpses the Manhattan skyline. Lasker and his jeans-clad employees are devoted to building, refining, and selling a unique online advertising concept called CPL, or cost-per-lead.

I had absolutely no idea what that meant, but it turns out I’m not alone. “How do I explain to my mom what I do?” a giggling Lasker said he often asks himself.

Despite the fancy moniker, CPL is a fairly no-nonsense approach to advertising. “We are building a system for advertising that lets advertisers buy ads, and only pay for those ads if someone opts in,” Lasker said, leaning back in his chair, hands clasped over his head. 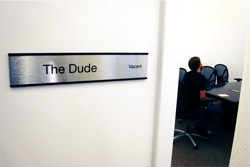 An example: Pontiflex places ads for Huggies on a website like BabyCenter.com. Within the ad is a space to enter a valid e-mail address to sign up for a newsletter for moms. You see the ad, you sign up, Huggies pays, and never once do you navigate away from BabyCenter.com. Companies typically pay $1.25-$2.00 per sign up, but rates vary, and the fee for an ad is split between the host site and Pontiflex.

Cost-per-lead, or as Lasker calls it, cost-per-sign-up, differs from traditional advertising models where advertisers pay for eyeballs only. Pontiflex offers “contextual targeting,” meaning they place ads to sign up for the ASPCA on websites like Dogtime.com, where it’s safe to assume users are interested in animal rights.

The idea for this sort of advertising came to Lasker, a Red Hook resident by way of Baltimore and Chile, when he was working at big ad agencies in the early days of performance advertising on the Internet. But the technology required to implement Lasker’s plan wasn’t yet available.

With the help of “a really big tech team” and some venture capital, Lasker and his co-founders developed the data transfer engine they needed. Pontiflex launched in 2008, and is the first company to use CPL. Their system is in high demand by ad agencies and other institutions around the country, and Lasker claims they have no direct competitors.

As for whether this brand-specific advertising model will ever be applied in other mediums, like television or radio, Lasker smiled coyly and said only that Pontiflex is doing some research that he can’t really talk about.

Having started two other companies, Lasker was familiar with the “boot camp mentality” of New York startups. “You get run over in the city pretty fast if you’re not progressive,” he said. “I think it forces you to really do a lot in very little time.”

Pontiflex, which tripled its revenue last year, certainly followed that ethos. So did many other DUMBO-based digital outfits, whose success Lasker attributes, at least in part, to their “blank slate” of a neighborhood.

Brooklyn, in his view, is “hip, but it’s totally scrappy,” much like startups themselves. “We’re not going to have wood paneled offices and drive around in fancy town cars,” Lasker continued. “It’s more entrepreneurial.”

Lasker is no tech-whiz, but he regards the “geek” stereotype as a badge of honor. “For me, it means you think kind of differently, you don’t necessarily fit in,” he said. “And with a startup, that’s great.”

Given the rampant optimism in his industry at present (as witnessed by this reporter and detailed in last week’s New York Magazine cover story), Lasker confessed there’s at least one negative aspect of this booming field.

“There’s a lot of hype,” he said. And while hype can be good, it can also lead to backlash. “You have to be careful. Sometimes there’s just a lot of smoke.”