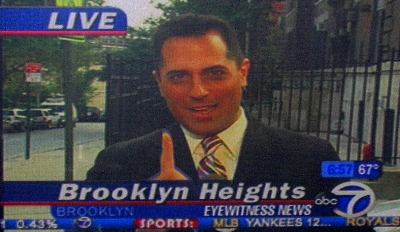 WABC-TV was live outside P.S. 8 this morning to mark the beginning of the 2006 – 2007 school year for New York City kids.  Today also marks the beginning of Mayor Bloomberg's new system which includes a new management structure (principals no longer report to superintendents) and 12 new charter schools.

NY1 also was outside the school, interviewing students and teachers about their first day back. (Watch video. Real Player required)

NY 1: City Public School Students Head Back to Class: In Brooklyn Heights, where students and teachers were returning to P.S. 8, the sense of excitement could be felt in the air.
"I do like school and I like all the subjects they have and everything," said student Georgie Forrest. "And I like seeing my friends everyday."

"We just got to make everybody adjust very quickly," said teacher Greg Williamson. "Everybody really enjoys being together and we make it feel like a real community, which is what we do here at P.S. 8."

NYT: Back to School in a System Being Remade: For the first time this fall, 321 principals, more than a fifth of those in the system, will no longer answer to a superintendent and will have greater authority over their budgets, staff and instruction. In exchange, they have agreed to meet performance targets and could face dismissal in two years if they fail.

Partly to give those principals more money for their schools, the city has cut the number of jobs in the school bureaucracy by 328, worth $87.5 million in savings. Many of those jobs were in the 10 regional offices that Mr. Bloomberg himself created. Consultants are still looking for ways to make more than $100 million in additional cuts.

Additionally, 12 new charter schools are opening, a movement that Schools Chancellor Joel I. Klein would like to see flourish, saying the schools, which are largely free from city oversight, embody principles of autonomy and accountability that he wants for the entire school system. But the city will have to plead its case for more charter schools with Albany, which until now has refused to lift the statewide cap of 100 charter schools.

“When we came into office, I think conventional wisdom was that you could not do anything to improve big-city public school systems,” Mayor Bloomberg said last week, “and I don’t believe that that’s the zeitgeist out there anymore.”