Will You Go Back to Le Petit Marche? 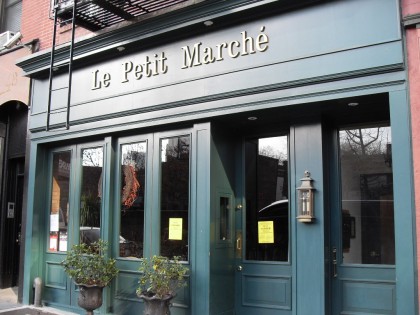 Le Petit Marche’s [46 Henry Street] recent trouble with the NYC Department of Health and the establishment’s attempt to spin its violations as the product of “clerical errors” has us wondering if Brooklyn Heights residents are willing to return to dining there should they pass re-re-inspection. Owner Daniella Silone told BHB that the situation is “breaking her heart” and she hopes that neighborhood residents will not “forsake” her and the establishment for this chain of events. On Silone’s and LPM’s side is the fact that they’ve created a beautiful space, helped to revitalize the North Heights dining scene and most of all made a previously hideous facade into something worthy of our historic neighborhood.

However, that may not be enough for some to overcome the basic facts. The NYC DOH has been clear with BHB from the start regarding the closing of Le Petit Marche – they failed three consecutive inspections, did not remedy violations and failed a re-inspection yesterday. “Clerical errors” played no part in the restaurant’s closing, a DOH spokesperson adds. Also, the restaurant’s re-opening on Sunday night for a private party – which sources claim was attended by many Brooklyn Heights Brahmins – was not permitted by DOH rules.

So, the question is: