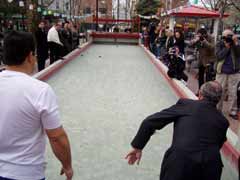 The New York Daily News makes some recommendations to Mayor Bloomberg on where to entertain himself while working at this temporary office in Downtown Brooklyn.  However New York's Picture Newspaper leaves out a few joints that Hizzoner should check out including N'eights staples Noodle Pudding and Henry's End as well as strong newcomers Jack the Horse Tavern and Le Petit Marche. Not to mention that Bloomie is welcome to challenge Homer, Qfwfq, Claude Scales, Captain Jack, EJ, Risi and the rest of the regulars at the next Dick Swizzle Sudden Death Trivia Gameshow on July 18 at Magnetic Field. And as the photo on the left suggests, Mr. Bloomberg loves bocce. If Hizzoner thinks he can handle the stiff competition from BHB's team Brigate Bocce we challenge him and 3 staffers of his choice to a game at FloydNY anytime in the next two weeks.

New York Daily News: You're Gonna Love Brooklyn: But there's plenty of shopping all around – from the tony shops of Montague St. to the discount palaces at Fulton Mall to the hip boutiques of Court and Smith Sts.

On a rainy day, you can catch a flick at the UA Court St., the borough's loudest movie theater. But on a clear afternoon, you can take a free dip at the barge pool between Piers 4 and 5 – which boasts sweet views of your old home in lower Manhattan.

Elsewhere, Mayor Bloomberg and gal pal Diana Taylor can watch the sun set at the Fulton Ferry Landing at the foot of the Brooklyn Bridge, and share a pie at Grimaldi's, one of Sinatra's favorites and just a jaunt from the Brooklyn Heights Promenade.

But if it's hot dogs you're craving, don't bother making the trip to Coney Island: The lines at the Nathan's Famous at the food court on Court St. are much shorter.

And before going back to Manhattan, you might want to rub elbows with all the Brooklyn lawyers and district attorney employees at O'Keefe's Bar and Grill, also on Court St.