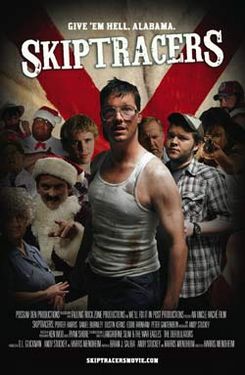 Brooklyn Heights resident/ half of the hilarious comedy team of Stuckey and Murray, Andy Stuckey, is one of the stars, writers and producers of Skiptracers a comedy set in his home state of Alabama. There will be a big premiere bash and screening next Friday (9/11) in Manhattan.

Oh and Brooklyn Heights-based band The Defibulators provided the flick’s soundtrack and will be  playing the opening night afterparty at Webster Hall on Friday, the 11th. at 9pm.

Details after the jump.

Andy Stuckey, Harris Mendheim and D. L. Glickman invite you to the opening night celebration of their independent feature film Skiptracers. There will be FREE COLT 45 BEER before the show and live music after the opening night screening from bands featured in our soundtrack. Details Below. BRING IT!!

2. 7:00- 9:00 The movie and a short Q and A afterwards. Get tickets to the premiere at the Village East Cinema. The theater is at 189 2nd  Avenue -two blocks from Finnerty’s. Tickets are available at the box  office and here http://www.villageeastcinema.com/

3. 9:00- until. Join us for an after party at The Studio at Webster  Hall. The Defibulators will be there with some special guests. Webster  Hall is located at 125 East 11th St. between 3rd and 4th Avenue. It’s  about a 4 minute walk from the theater. There is a $5 dollar cover for  this show.

Please spread the word to anyone you know who may be interested in  seeing the movie. We need as many folks as possible to check out this  film. Looking forward to seeing you there and witnessing the misadventures of the Trawick Family in Southeastern Alabama. Bring your family, your friends, random people you met on the street. Come one; come all…. see it again and again. You will laugh for some of the
right reasons.