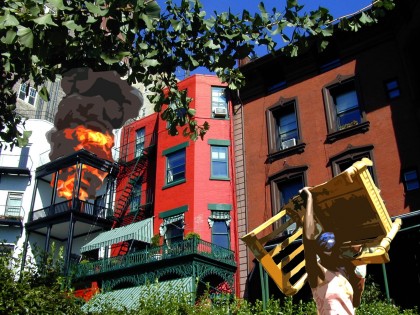 Beginning October 1, The Brooklyn Historical Society presents Brooklyn Utopias an exhibit that will undoubtedly get folks in Brooklyn Heights talking.

It features the work above showing a tower of fire spitting out from a brownstone along the Brooklyn Heights Promenade. The artist, Grace Graupe-Pillard, describes the work entitled  Brooklyn Homes/Fire:

My photographs involve the subversion of the idea of an imaginary, psychological Brooklyn Utopian place by making visually evident an extreme opposite. I portray a place of chaos and political terrorism resulting from the coercion of the populous into a Utopian totalitarian state.

More from the BHS press release:

The Brooklyn Utopias? project invited both professional artists and emerging teen artists to indentify and respond to the often-conflicting visions of the most livable and sustainable Brooklyn, and/or imagine their own Brooklyn “utopias.”­ The resulting work of over 30 artists and Brooklyn teens will now be on display in a series of three Brooklyn Utopias? exhibits: at BHS, Brooklyn’s Old Stone House, and the nonprofit youth art center Starting Artists, Inc. in Fall 2009. The participating artists at the Brooklyn Historical Society exhibit bring diverse approaches to the Utopias theme. Artists include Triada Samaras with photos of her “Democracy Wall,”—an interactive mural protesting large-scale development in Carroll Gardens. A second category of artworks include Jess Levey’s guerrilla photo projections on condos and Tracy Collins’ photographs of Atlantic Yards construction.
Alongside the contemporary artists’ work, the BHS exhibit will also look at the historic role of artists in envisioning a more ideal Brooklyn, connecting past and present. The exhibit opening is free and open to the public. For more information on this project, please visit www.brooklynutopias.com.