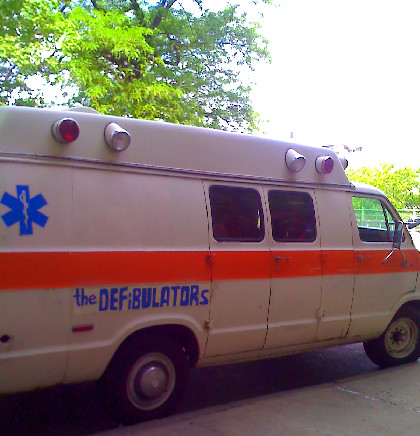 “Whackabilly” rockers The Defibulators have parked their van on Columbia Heights this holiday weekend.   The Brooklyn based combo (do any of them live in Brooklyn Heights?) have a new album, Corn Money, and will be playing Rodeo Bar in NYC on June 5.   Their van has been seen before in the neighborhood, most notably in April by Flickr contributor So Cal Metro who says:

1970s Wayne Medicruiser ambulance on a Dodge Tradesman 300 chassis. This thing looks to be in really good shape, like it was only somewhat recently retired. Could it be? Anyway, it now says “The Defibulators” on the sides. Could be a band? Seen in Brooklyn Heights.

The band’s informercial (nsfw) features ventriloquist dummy “Buddy Ebsen-Hackett” but masters of useless information like me (and Poppa Fink and probably Nabeguy… oh and Scales too) will note that this is the consumer version of Edgar Bergen’s Mortimer Snerd.

New Album CORN MONEY out March 3rd! from the defibulators on Vimeo.