Soapbox Derby Pops Up in Bronx 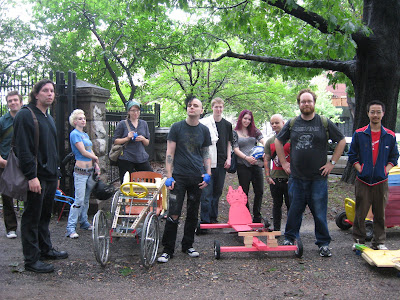 The Paping Soapbox Derby, which began on Brooklyn Heights’ “Suicide Hill” a few years ago until it moved away due to a variety of issues,  has found a new home in the Bronx.  The race happened last Saturday and Boogie Downer was there:

Boogie Downer: Turns out that the Paping Soapbox Derby is now in its 7th year, and it can be added to a neverending list of things that used to be cool in Brooklyn, and now are not. The race used to take place on a steep Columbia Heights hill tellingly nicknamed, “Suicide Hill.” Well, the hill was right near the Jehovah’s Witness center over there, so those folks were concerned about liability issues. The city caught wind of the whole thing and refused to grant a permit for the event. You can read more about the derby’s history and slow death in Brooklyn here and here. After a brief stint in Inwood’s Fort Tryon Park, the Paping Soapbox Derby seems to have found a new home here in the BoogieDown.