It’s my greatest pleasure in life to pick up my Labs each day. They regard the whole process as another repetition of the Christmas they regard their lives as being. In general I can say that Bangor, Daisy, Farmer, Milly, Mully and Pickering – the Labs I’ve worked with most over the years – are ecstatic when I walk in. But the ways each shows its ecstasy is unique and thrilling.

Bangor likes to remain in his spot at the head of the stairs. His eyes glow green as he stares at me with fake suspicion. I narrow my eyes and bore into him and then explode, “Bangor!” He flies down the stares at that and jumps up to gently bite my chin. I take his paws and, often as not, begin singing “Shall We Dance” as I waltz him around the foyer. He’s the only one of my dogs who loves to dance. When I bend over to put the prong collar on him, he weasels between my legs so I can scratch his butt, at which he begins to stamp is back paws. The better the butt rub, the harder her stamps. 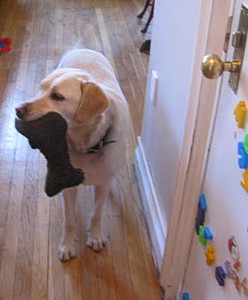 I open Hermia’s door just enough to see one eye. Her tail begins thonking the wall at that and she rushes out of the apartment with a shoe or her human sister’s Elmo in her mouth. I reach down to rub her (she and Milly are silky as otters) and she starts turning tight circles, trying to get scratched everywhere at once. After a couple of turns, she heads toward the stairs, then stops, looks back and decides she wants more. We do this three or seven times before she runs down where she walks in circles near the door. I stalk her slowly down the staircase. We both halt. She drops into a play bow and gives one woof, at which I laugh and say, “I got your goat, Goat,” and her tails starts thonking the walls again.

Pickering is my all time favorite pick up because it’s all about getting as close to me as he can. I sit down on the couch and he burrows his head into my side while flipping over for a belly rub. We can do this for hours as he tries fruitlessly to find a way to become a part of me, with breaks to sit up and gaze at me with his Bette Davis eyes in disbelief that life could be so good as I rub his ears and he leans his big head on my hand.

Farmer was a solo dancer, his butt in syncopation with his head. I had to dance, too, doing the twist while shaking my hands in the air, chanting, “We’ll do the Farmer dance, let’s do the Farmer dance,” winding him up until his tail was a yellow blur of rhythm.

When I walk in after a long separation from Daisy, she turns into Alice Roosevelt, hopping on the couch and pawing the air until I sit down with her and say terrible things about what I had to endure while I was away. She hurls herself into my lap, twisting for a belly rub then jumping up to lick my face only to fall into belly rub position again. Soon she actually climbs into my lap and barks out why I should never leave her.

It would behermia-must-retrieve1 flattering except that she pretty much does this with every visitor or visit.

The last four weeks have been a nightmare health crisis for my mother who is 2,000 miles away. As I lay awake each night in Arizona, praying the Klonopin will knock me out before it’s time to get up again, I think of Milly racing up and down her steep stairs and of Pickering nesting between my ribs. I think about the long moment that Daisy will look at me before she takes it in that I’ve come back after a week and the moment she decides to become a turban. I keep playing over those greetings until sleep comes. That happiness is the love my mother, like most mothers everywhere, promised her babies would always be.