By Thomas on June 24, 2009 8:57 pm in Development, Downtown Brooklyn, Transportation 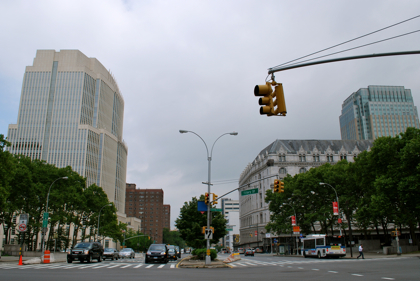 The future of Tillary and Adams streets would include wider, landscaped medians for both pedestrians and bicyclists, according to plans presented last night at the second public meeting about the impending 2012 renovation.

The two-year Department of Transportation project has already secured $14.4 million in funding, but is looking to secure more federal money from the TIGER stimulus fund.

The work on Tillary and Adams streets will coincide with the upcoming, but separate reconstruction of the Brooklyn Bridge ramp, which also includes a fresh paint job for the bridge.

“We’re trying to go for more of a street feel, less of a highway feel,” said William Vallejo, a traffic engineer on the project.

Although the wider median would reduce the number of vehicle lanes on Tillary Street, DOT employees said they were confident that it would not affect the flow of traffic. In fact, they said shorter pedestrian crosswalks would allow for better traffic flow, because if it takes pedestrians a shorter amount of time to cross the street, then more cars can go in a traffic light cycle.

Among other changes, the DOT is looking at widening sidewalks in order to shorten the length across pedestrian crosswalks, which are currently 134 feet wide on Tillary Street and 126 feet on Adams Street.

The project would also consolidate the main Adams Street thoroughfare with the service roads running parallel to it. Overall, the project will eliminate about 24 parking spots.

The proposal had a lukewarm reception, with one attendee saying the proposal was “very nice, but didn’t include anything outside the box.”

Some audience members questioned the absence of a mid-block crosswalk on Adams Street between the Brooklyn Bridge and Tillary Street, but the suggestion was quickly shot down because drivers typically don’t pay as much attention to pedestrian-only crosswalks. A suggestion for a pedestrian bridge was also dismissed as too expensive, because it would add as much as $10 million to the project.

If you couldn’t attend the presentation (which we will post as soon as we get it), you can leave your feedback on the project at the Department of Transportation website. What do you want to see happen on Tillary Street?