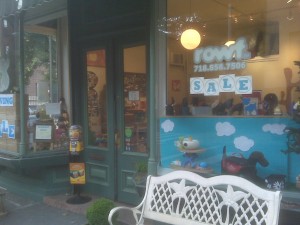 Where the store is moving, however, is still a mystery– even to the owners.

“We just found out a couple of weeks ago,” said Yuning Chiu, co-owner of Rowf. “We’re just trying to focus on moving out by the end of the month.”

Chiu said they were forced to relocate the store, which opened in late 2004, because the landlord wanted them to sign a long-term lease.

While she would like to keep the store in the Brooklyn Heights, Chiu said that if she did, it would have to be on the “outskirts” of the neighborhood, because rent prices on Henry and Montague streets are too high.

Those who want to follow where the store will relocate can check for updates on the store’s website.

“Scooby and Boo are going to miss coming to work everyday,” Chiu said, referring to the two adorable dogs that roam the store.