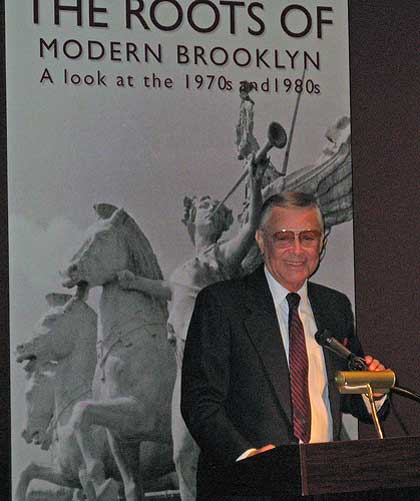 Former Brooklyn Borough President Howard Golden (photo above) was the guest of honor yesterday evening at a reception at the Brooklyn Historical Society to inaugurate an exhibit and series of events on the theme "The Roots of Modern Brooklyn – A look at the 1970s and 1980s".  (For details on the remaining events, which are free and open to all, see our earlier post here.)  The exhibit and events focus on the time when Brooklyn began to recover from its post-World War II decline, which was highlighted by the departure of the Dodgers, as well as of many of the manufacturing plants that were mainstays of the Borough's economy through the first half of the last century.

The seeds of Brooklyn's renaissance as a residential, commercial and artistic venue were planted and began to sprout during Golden's political career, first as a City Councilor and then as Borough President, a career which began in the 1960s and ended in 2001.  Several former colleagues in government, former City Councilor (now Justice) Abe Gerges, City Comptroller William Thompson Jr. and incumbent Borough President Marty Markowitz, were present and shared anecdotes about working with Golden.  Mr. Thompson described Golden as a political mentor, and recalled his strong devotion to the interests of the Borough, to which he was willing to sacrifice personal and partisan considerations.  Mr. Markowitz observed that Golden had the experience of sitting on the Board of Estimate (a once powerful arm of City government that included the Borough Presidents along with the Mayor, the Comptroller and the President of the City Council, which was abolished following a U.S. Supreme Court decision finding it unconstitutional on "one person, one vote" grounds), while he (Markowitz) had the experience of standing on a bathroom scale in his boxer shorts to kick off his campaign to get Brooklynites to lose weight.

In his own, extemporaneous (he later told me he had been assured he wouldn't be asked to speak) remarks, Golden recounted his experiences with several Mayors.  While he found himself at odds with John Lindsay on many occasions (and once shared a platform with him at a park opening in Bensonhurst where one of Golden's constituents threw an egg that splattered over the Mayor's shirt and tie), Golden said he came to have great respect for him, and they developed a friendship that lasted after Lindsay's retirement from politics.  He also recalled having Abe Beame awakened at 5:00 A.M. to demand the restoration to the City budget, which the Council was to vote on that morning, of funds for Brooklyn that had been cut and re-allocated to another Borough in a last-minute deal to which Golden was not privy.  He succeeded in this, and also got the Mayor to agree to provide several new fire marshals to Brooklyn to deal with an arson epidemic.

The exhibit consisted of panels of text accompanied by copies of photographs, documents and newspaper articles illustrating the theme of each panel.  These themes were, in order: "Bottoming Out in Brooklyn", documenting the Borough's decline from the mid-1950s through the '70s; "Brooklyn and the World", describing the effects of immigration and greater ethnic diversity; "Turning Things Around", showing how new construction such as Starrett City and efforts to end redlining of neighborhoods by mortgage lenders laid the foundation for revival; "Brooklyn's People Power", recounting the rise of community activist groups and their roles in protecting and reviving neighborhoods; "Preserving, Restoring, Renewing and Creating Communities"; "Celebrating Brooklyn's Arts and Cultures"; and, finally, "Celebrating Brooklyn".  Much of the illustrative material for the exhibit comes from the archives of the Phoenix, the pioneering community newspaper that both helped to inspire and documented Brooklyn's renaissance.  These archives are now preserved at Brooklyn College Library, which is the site of the next event in this series.