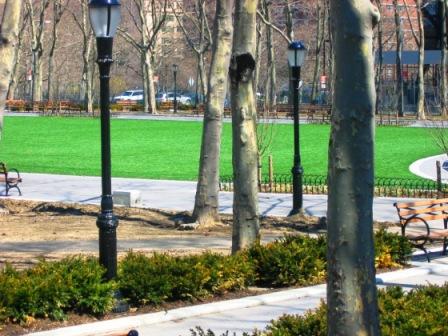 The Brooklyn Eagle reports in today's edition that the tiny pellets used to give the fake grass that the City is rolling out into hundreds of parks, including Cadman Plaza Park, could be toxic to humans and pets:

Brooklyn Eagle: Turf…: The city recently announced plans to carpet nearly 100 more fields with synthetic turf, made springy by a bed of rubber pellets spread beneath their surface. The problem is the lack of conclusive studies on the safety of the pellets, which stick to bloody scrapes and sweaty skin and find their way into socks, said one local professor calling for a moratorium on synthetic turf until more research is conducted. Preliminary testing indicated the rubber pellets, made from recycled tires, contain high levels of polycyclicaromatic hydrocarbons (PAHs) that exceed levels deemed safe by the state’s Department of Environmental Conservation, according to City College psychology professor William Crain. He conducted the study with chemists from City College and Rutgers University. Crain said the city should stop using synthetic turf, already installed on 70  fields, including Cadman Plaza.