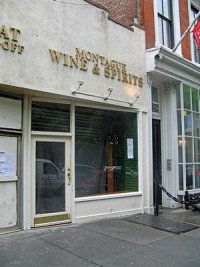 Montague Wine & Spirits on the Way Back

Thanks to a tip from BHB reader “Fritz” in his comment on today’s Open Thread Wednesday, your correspondent braved the chilly mist to walk half a block and get this shot, showing the plywood that had been in place since the fire two months ago removed and a new window and door installed at Montague […]

As you may recall, shortly after the fire on March 11, a sign appeared on the boarded-up front of Montague Wines & Spirits announcing that the store would re-open “in a few days”. After that, for a week or so, the door was usually open during the day, and Jeff and other staffers could be […]