One More Story About Nicholas “Nicki” Hernandez: Maybe He Wanted to Watch the Sun Come Up

A funeral home may not be a typical neighborhood hangout, but that’s Brooklyn.  We were a strange trio in the last days of this cold winter on Atlantic Avenue.   Nicki, Ronnie and I at Heights and Hill Funeral  Home, late afternoon.  In the foyer, brilliant sun blazing through the  stained glassed window, potted plants and […] 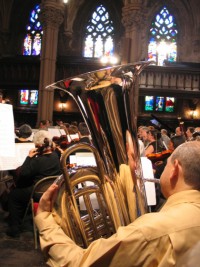 Save the date:  Sunday, December 20th at 3pm, The Brooklyn Symphony Orchestra performs at The Church of St. Ann and the Holy Trinity, 157 Montague Street.  Tickets are $15 and children are free.  Following the concert, there will be a reception with refreshments and lots of holiday cheer.  Founded in 1973, the  BSO is a […]

Neighbors:  Please be advised at approximately 9:00 p.m. tonight as I was walking home on Hicks between Montague and Joralemon I was accosted by a gang of four boys, approximately 14-15 years of age.  Share this Story: Tweet 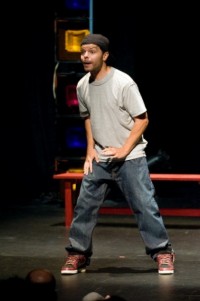 County of Kings at Public Theater

By Lillian Ann Slugocki on October 25, 2009 9:57 pm in Arts and Entertainment, Brooklyn Heights

What’s your favorite Atlantic Antic?  Mine is Eddie Kochak and The Amer-Abic Ensemble and the exotic,  sexy, belly dancers.  This is Ahlan.  Eddie is at the corner of Clinton and Atlantic every single year.  And every year, the music and the dancing draw huge crowds.  Although I must say I missed the male belly-dancer.  Bring him back wherever […] 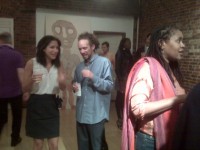 Brick Real Estate on Atlantic Avenue becomes Brick Art Gallery once a month.  This Saturday night, October 3rd, paintings by Robert Edward Franklin.  His exhibit, Gray Matter Study.  Stunning large scale paintings reminiscent of Jean Dubuffet.  A great party as well; wine, food, DJ.  If you’re not on the list, call them up and get invited.  […] 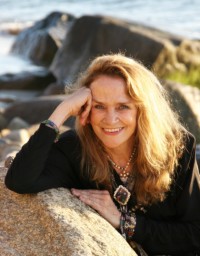 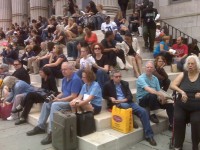 I approached the Main Stage at Borough Hall Plaza for the 4th Annual Brooklyn Book Festival at around noon on Sunday—  already a large group of people congregating on the court house steps.  Chuck Schumer, our New York State Senator, entered the fray kissing babies, as he and Marty Markowitz, Borough President, took the stage to welcome everyone to […]

On Sunday, September 13th, Brooklyn Borough President Marty Markowitz, the Brooklyn Literary Council and Brooklyn Tourism will host the 4th Annual Brooklyn Book Festival.  The event begins at 10:00 a.m. at Borough Hall Plaza.  Over 220 authors, more than 150 booksellers and numerous panel discussions can mean only one thing:  if you love books, if you write books, if […] 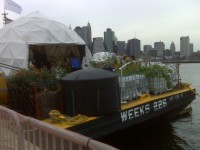 The Waterpod has landed on Pier 5

“The Waterpod is a sustainable, sculptural art and technology habitat, with 4 artists living on and off it, generating food, water, and power in a contained and self-sufficient environment,” and now it’s here in Brooklyn Heights through August 17th on Pier 5.  It’s open to the public on Fridays from 3-7 pm and on Saturdays […]