County of Kings at Public Theater

By Lillian Ann Slugocki on October 25, 2009 9:57 pm in Arts and Entertainment, Brooklyn Heights 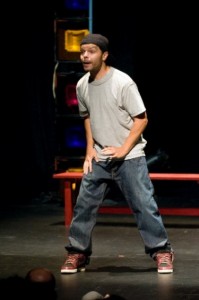 County of Kings, written and performed by Lemon Andersen, directed by Elise Thoron at The Public Theater through November 8th, is a tour de force coming of age story set primarily in Brooklyn, Kings County.  Produced by Spike Lee and the Culture Project (w/Steve Colman, Jayson Jackson, Tom Wirtshaffer), Andersen explodes onstage  “car-jacking a sonnet,” spitting, rhyming and dancing his way through a fractured childhood in Sunset Park that culminates with a young man finding his voice in the most influential cultural movement of our time, hip hop.

As I entered the Neumann Theatre 15 minutes before curtain, the stage was bare except for an  abstract backdrop, a few metal columns and a bench.  The pre-show music was loud and infectious; remixes of Missy Eliot, Eminem. The house was almost deserted.  Little by little, more and more people trickled in.  The music remained loud.  Suddenly, Lemon appeared house right, on fire with words, with language— divided into set pieces, each narrative mixed drama and urban poetry as he told his story about a mother who died of aids, of a life on the streets of Brooklyn, selling crack, going to jail, finding his voice.

He was funny, taut, a coiled spring breaking loose, lithe and spry.  When he dances with his dead mother to You Can Ring My Bell while waiting on line for the Himalayas ride at Coney Island, you can see her in his eyes.  When he gets a blow job from a crack whore in Ohio, you’re a voyeur, when he’s a eight year old child and completely alone in the world, its poignant and beautiful.   County of Kings: the beautiful struggle was originally produced  as a Literature to Life production by The American Place Theater:  A company with a long reputation of unleashing great solo talent into the world.

Andersen is a critically acclaimed performer on HBO’s “Russell Simmons Presents Def Poetry Jam on Broadway” for which he won a TONY award for his writing and performance as well as a Drama Desk Award nomination.  His coming of age story has nothing to do about a tree growing in Brooklyn, but it shares the same bittersweet legacy.  He’s a Brooklyn boy through and through.