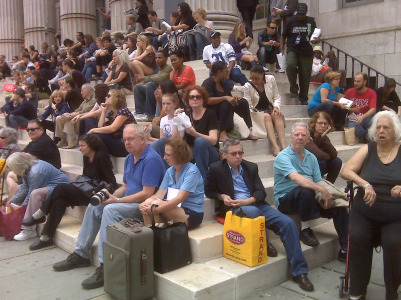 I approached the Main Stage at Borough Hall Plaza for the 4th Annual Brooklyn Book Festival at around noon on Sunday—  already a large group of people congregating on the court house steps.  Chuck Schumer, our New York State Senator, entered the fray kissing babies, as he and Marty Markowitz, Borough President, took the stage to welcome everyone to the festival.  The night before at the Gala, I watched as Edwidge Danticat accepted the BoBi Award in the auditorium at St. Francis College, and Aleksandar Hemon won the St. Francis College Literary Prize of $50,000 to support a writer in mid-career.  His acceptance speech was memorable for its honesty and brevity.  He said something like— I guess I’ll keep at this.

Next stop, the International Stage for the 1:00 presentation of Rasskazy: New Fiction from a New Russia.  As I took my seat, I thought, thankfully, it’s much cooler than last year, the sky slightly overcast.  As Dale Peck  and then Francine Prose read from the anthology, published by Tin Press, it was hard to concentrate with a siren roaring nearby, but indeed it seems like the days of the gulag are long gone.   I left before the end of the reading because the sun had come out and my brain was suddenly on fire.

I sought out the shade on the steps of the court house and watched the performance of Only the Dead; readings from Brooklyn’s revered authors from Walt Whitman to Frank McCourt by actors from the Troupe.  I listened to the gritty noir of Mickey Spillane, the rolling cadence of Angela’s Ashes, and the staccato rhythms of The Executioner’s Song by Norman Mailer.   I darted into the court house and slipped into the Community Room and caught the tail end of Literature in the Digital Age.  Writers such as John Freeman, Dwight Garner and Sarah Schmelling debated on the end of the book in the age of Kindle, moderated by Maude Newton.

On my way out I was accosted by a skeleton handing out flyers for Doubt, Faith and Monsters, a panel discussion on the Angel of Death held in the St. Francis Reading room.  I shuddered but only because it was time for an iced coffee.    I wandered through the sea of blue tents checking out all the independent publishers, and wished the festival extended for an entire weekend.  It was impossible to catch every event and there were so many of them, all notable, all wonderful.  I’m sorry I missed my friend Amanda Stern from The Happy Ending Reading Series, and also sorry to have missed Editor as Author: Discipline and Freedom.

But I did catch Love: The Unstoppable Bestseller, a panel of romance authors, which was moderated at the last minute by Ron Hogan— Sarah Wendell was stuck in traffic.  I’ve always been curious about the genre, always believing that it perpetuated a particular feminine stereotype, and while this panel didn’t change my mind, I very much enjoyed listening to the women who have been extremely successful writers; one author has published 55 books.  It’s a 1.7 billion dollar business so obviously people are reading the books, and good for them.

To say there was something for everyone is an understatement.  Brooklyn has been likened to the Paris in the 1920’s, an unstoppable literary force, and this much is certainly true.  Plans are already underway for the 2010 Brooklyn Book Festival, information will be posted by November 1, 2009.