Willowtown Spring Festival: And There Were Pony Rides Too 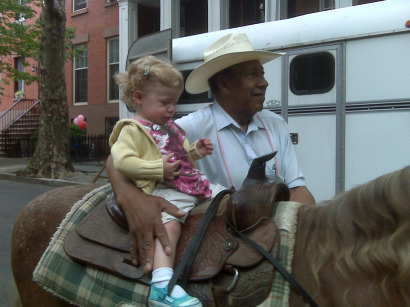 The Willowtown Association held its annual spring fair this Saturday— live music, good food, plenty of fun for the everyone and as previously reported many local VIPs in attendance.  By far the most popular event were the pony rides.  Junior equestrians saddled up and rode off into the sunset, or rather down Willow Place.  Some of the children were laughing, some were crying, and everyone was taking pictures, including myself.

According  to the Walking Tour Guide, published by the Association, the area of Brooklyn that included Willowtown was once part of a 40-acre country estate of Philip Livingston, a signer of the Declaration of Independence.  Back in those days, everyone rode horses, today not so much.  However, it was still fun to amble up and down the street, taking in the children, the horses, the smell of burgers cooking on an open grill, and the laughter of my neighbors, on a cloudy spring afternoon, in the shadow of the trees.