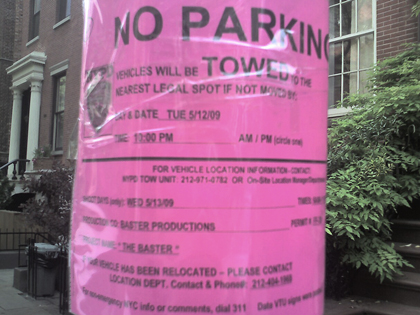 Qfwfq spotted this sign on Columbia Heights near Willow this morning. Jennifer Aniston’s The Baster is scheduled to be shooting in the area on Wednesday, so cars will need to be moved by 10pm Tuesday night.  The flick, which co-stars Jason Bateman and Jeff Goldblum, is being described as an “artificial insemination rom-com.”  Here’s the logline from IMDB:

An unmarried 40-year-old woman turns to a turkey baster in order to become pregnant. Seven years later, she reunites with her best friend, who has been living with a secret: he replaced her preferred sperm sample with his own.

Location scouts were looking for apartments in the area last month for another Aniston vehicle, Bounty Hunter, co-starring Gerard Butler.  Shooting of that film begins next month according to reports.