This interview was conducted at a safe distance, by phone and text, with Jerry Scott, Bar Manager of Henry Street Ale House for the past 5 years. 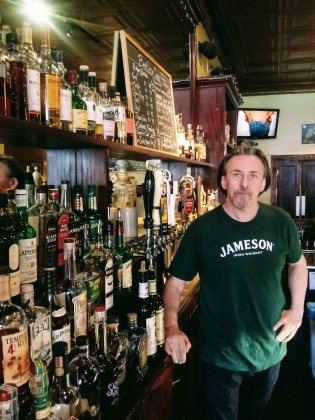 How long has Henry Street Ale House been in business?

The owner, Eugene, opened the Ale House about 25 years ago. It was originally called Park Slope Brewing Co. Annex. Eugene was part owner of a small brewery in Park Slope. When he split with his partner, the name was changed to Henry Street Ale House.

What was the mood there yesterday?

Well, we had to close by 8:00 p.m. as the law mandated. Everyone is just trying to cope. Every employee is an individual and coping a bit differently. Most are trying to grin and bear it and hoping for the best. Eugene, the owner, is trying to keep everyone employed as much as possible. He owns the building, so that’s been a big saving grace.

How many employees are there and what do you expect to be the collateral damage?

We have about 15 employees. We’re cutting the hours to 1:00 p.m. to 9:00 p.m. There will be less shifts and less hours for everyone unfortunately. I expect probably 20 – 40% less in wages for everyone, including myself, but it’s hard to tell. The kitchen staff will take less shifts. Some may choose not to work. We had a busser leave town to be with his family. Our employees rely on tips, which will be lost. So that’ll be a big hit.

The bar will be offering take-out on everything on the menu, including all drinks, all beers. We’ll be setting up delivery as soon as tonight or tomorrow. Two of our servers will be doing the deliveries.

How are you coping yourself?

Well, this is the first day of this new reality and hopefully this will be over sooner than later. We’ll be leaning on each other as co-workers, and we’ll have to as a society. We all have to get through it together.

What’s the best way to place an order?

Right now, you can call our number. We aren’t set up for online ordering yet, because we never had to be. We posted the number for ordering on our windows and on our website.

Ways to reach out:

Helping Cats in the Time of Coronavirus
Open Thread Wednesday