Wednesday’s Brooklyn Heights Association annual meeting began with a summary, by BHA President Martha Bakos Dietz, of BHA’s accomplishments during the previous year.  First among these was the apparent elimination of the city Department of Transportation’s plan to demolish the Brooklyn Heights Promenade and replace it with a temporary six lane highway. Both the expert panel appointed by Mayor de Blasio and the City Council have now rejected that plan. Still, Ms. Bakos Dietz said, there is work to be done. The BHA has joined with A Better Way NYC and the Cobble Hill Association to form the Coalition for the BQE Transformation which, in conjunction with other affected community groups, will strive to assure a plan for the future of the BQE that respects the needs of these communities and realistically reflects future transportation needs. In the photo above (by and © Andrew Porter) Ms. Bakos Dietz is shown holding the new poster designed for the Coalition, which she said can now replace the “No Highway to Hell” posters.

The planned eight month closure of the Clark Street subway station to replace its three decrepit elevators will, Ms. Bakos Dietz said, begin sometime in 2021. The Transit Authority has given assurances that it will take steps to help the merchants whose shops line the arcade outside the turnstiles by putting up signs that inform the public that the arcade, and the shops, are open during the construction.  During the later question and answer session, someone noted that during an earlier and shorter closure of the station about twenty years ago, the merchants had been given rent abatements.

The Brooklyn House of Detention is outside but close to the Heights, and plans for its expansion, in conjunction with the City’s planned closure of Rikers Island, are a concern for Heights residents. Ms. Bakos Dietz said the existing House of Detention is now closed and will be demolished. Its replacement, scheduled to be completed in 2026, will, thanks to advocacy by the BHA and other community groups, be much lower than the City’s original plan.

Rats have been a problem on the Promenade. Ms. Bakos Dietz said the City Parks Department will provide twenty rat-proof trash receptacles, and increase extermination efforts. During the Q&A period, a Heights resident said the area below the circle at the north end of the Promenade and the walkway paralleling Columbia Heights is a dumping ground for trash and an ideal rat habitat. Andrew Porter pointed out that this area, which is adjacent to the BQE, is under the jurisdiction of the Department of Transportation. Ms. Bakos Dietz said, “We have lots of experience dealing with them.” 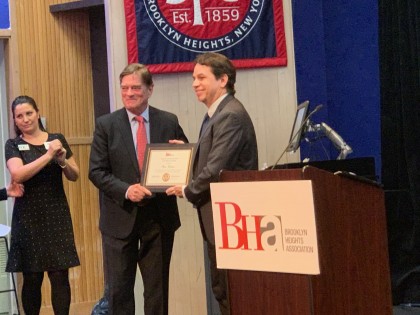 Ms. Bakos Dietz was recognized for her three years of service as the BHA’s President. Following her report, WNET-13 host and Heights resident Tom Stewart (in red tie in the photo above by C. Scales for BHB; at left in the photo is BHA Executive Director Lara Birnback) presented awards for community service. The first was to architect, urban planner, and Heights resident Marc Wouters (at right in photo above) for his work with the BHA in designing alternative routes for the BQE. 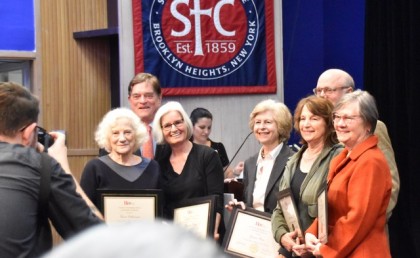 The other was to a group of local residents who formed the Promenade Gardens Mapping Project to map the locations of plantings in the Promenade Gardens. The map will be a useful resource should BQE work cause damage to the Gardens. Members of the group are in the photo above (by and © Andrew Porter), with Mr. Stewart standing behind them. 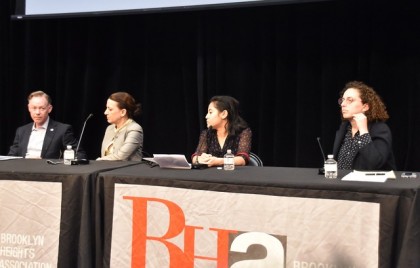 Following the community awards there was a panel discussion on the topic “Empty Storefronts and Our Commercial Corridors: How Can We Help Great Local Businesses Survive and Thrive?” The panelists were (left to right in the photo above, by and © Andrew Porter): Randy Peers, President and CEO of the Brooklyn Chamber of Commerce; Deborah Marton, Executive Director of the Van Alen Institute and a Heights resident; and Nur Asri, Senior Research Analyst at Streetsense. The moderator, at right, was New York Times reporter and Heights resident Eliza Shapiro.  It quickly became evident that the panelists didn’t think there was any primary cause of the proliferation of vacant commercial properties, or any single or easy solution. High rents have been an important contributing factor, but they have recently been declining. On line shopping has disrupted retail for items like clothing, and even groceries, but it hasn’t affected the demand for restaurants or for services like barber shops and hair stylists, nail salons, and urgent care facilities. Some traditional stores survive because they provide good value and service, and because of a loyal customer base. In some neighborhoods, like Williamsburg, new construction has increased the supply of available commercial space while in others, like Brownsville, spaces that become vacant find few takers. High property taxes, regulations and bureaucratic inefficiency, an example being the long waiting time for liquor licenses, are an impediment to new business formations.

The panelists were unenthusiastic about the efficacy, or desirability, of a “vacancy tax.” During the Q&A, an audience member noted that an owner of a vacant property could, assuming they had another property or properties generating income, get a tax write off for the vacant property.  One panelist suggested that property owners should be encouraged to allow temporary “pop-up” users of vacant spaces.  Perhaps most important was the advice to be loyal to any local business that you love.

Addendum: an item I should have added to the original post was that, during the Q&A, one audience member raised a perennial issue; that of helicopter noise. He asked if there was any reason helicopters had been hovering above Remsen Street. Another person suggested that an increase in helicopter use of the Downtown Manhattan Heliport might lead to hovering while waiting for landing space. Someone else mentioned the Uber helicopter service from downtown to JFK. Ms. Bakos Dietz said the BHA is aware of the problem, and has contacted the organizers of Stop the Chop to plan a response.