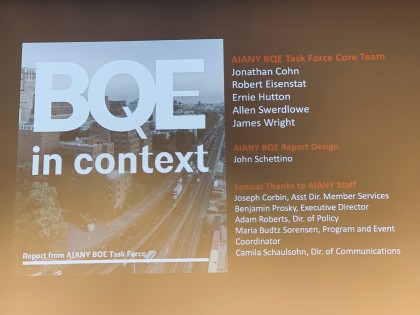 On Monday evening the New York chapter of the American Institute of Architects (“AIANY”) presented a panel discussion, “The BQE in Context: Communities, Infrastructure and Public Space.” AIANY has formed a Task Force to study the plans for reconstruction of the Brooklyn Queens Expressway below Brooklyn Heights. At the beginning of the program Robert Eisenstadt, chair of the Task Force’s Core Team, said the Task Force is working closely with the panel appointed by Mayor De Blasio to study the BQE issue. He said the Task Force had prepared a report that it has shared with the Mayor’s panel. After the event, I asked if I could have a copy of the report, and was told it is embargoed while the Mayor’s panel studies it, but would be released in about two weeks.

The panel discussion was introduced by Allen Swerdlowe, founder of the firm d7architects and a founding trustee of the Brooklyn Bridge Park Conservancy. He said he thought the City Department of Transportation’s announcement of its “innovative plan” for BQE reconstruction, that would close the Brooklyn Heights Promenade and replace it with a temporary six lane highway for at least six years was “The best thing that could happen, because everyone got mad.” Mr. Swerdlowe

performed the first study in 1997 for the relocation of a two mile segment of the BQE [presumably including the cantilevered portion below Brooklyn Heights] into a tunnel with a faculty grant from Pratt Institute. It was determined to be viable by the NYSDOT.

The panel’s moderator, Ernest Hutton, principal of Hutton Associates/Planning Interaction, began by noting that rehabilitating the BQE is like “fixing leaky water pipes.” He expressed hope that it could include a connection from the Clark Street subway station to Brooklyn Bridge Park.

Panel member Thomas Balsley, a landscape architect and “lead designer at his SWA/NYC Balsley studio,” was intrigued by designs that would extend Brooklyn Bridge Park, perhaps over a buried highway. He was cautious about proposals that would put terraced landscapes on the former BQE cantilevered roadbeds, noting that people on terraces often feel psychological discomfort.

Susan Chin, Executive Director of the Design Trust for Public Space, cited the old adage that “to a hammer, everything looks like a nail” to criticize exclusive focus on engineering and construction considerations, although she noted these are very important. She stressed the need for “community connections” and noted that any BQE solution “must serve many purposes.” An important consideration, she said, is “social resiliency”; provision must be made for continuing upkeep. Economic considerations – funding – must also be taken into account.

Alexandros Washburn, “a global authority on the design of cities and the founder of DRAW Brooklyn, an innovative design firm,” said that to accomplish a project like the BQE reconstruction in New York City, “politics, design, and finance must be brought into alignment.” A Red Hook resident whose home was flooded by Hurricane Andrew, he said any design should take int account protecting low lying areas against flooding.

Andrew Lynn, former Director of Planning for the Port Authority, Executive Director of the New York City Department of City Planning, and Land Use Counsel to the City Council, said the BQE is “a vital artery for the city” and expressed doubt about any proposal to reduce the number of traffic lanes.

We will follow up and report further once the AIANYC Task Force’s report is released; and report on any reaction by the Mayor’s panel.

Bargemusic This Weekend
An Evening with Bestselling Author of ‘Pachinko,’ Min Jin Lee, at First Presbyterian – Nov. 13 at 7:00 p.m.