None other than Mrs. Fink herself was a victim of a dangerous veggie dump out of a window at the St. George dorms on Henry St. this past weekend. Mrs. Fink posted on social media on Sunday at about 1:30 p.m.:

So this just happened- walking home from errands/haircuts and some ass from the dorms dumped a bucket of veg from a high floor all over us. Whatever that eggplant looking thing is? Was whole before it whacked my (bad)wrist. Then tomatoes etc. My wrist is killing me. Can’t imagine if there had been a newborn… I’m spitting mad. 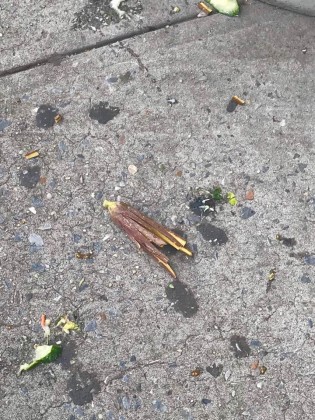 This writer personally witnessed the swelling and bruising on Mrs. Fink’s wrist. Young Fink, who was with Mrs. Fink at the time, could very well have been hit too. Couldn’t be the mad soda can bomber or the yogurt chucker from 2011, or the drunken budding scientist testing gravity by throwing down a cinder block from the roof in 2010, since surely she/he/they have graduated, probably, maybe, right?

Asked for a quote for this blog, Mrs. Fink, the best in the biz of one-liners, said, “Eggplant shouldn’t bite back. What did salad ever do to them? I thought vegetarians were pacifists. And what, no dressing?”

But seriously, someone, someone’s baby, someone’s sweet grandma, someone’s child whose parents are paying a ton for plush student housing! could have been very badly hurt.

Even a freshman is 18 or very close, and should know better, right?

Hey guys, how about you stop throwing deadly objects out the window and maybe, oh I don’t know, VOTE?