In a service this afternoon at which The Right Reverend Lawrence Provenzano, Bishop of the Episcopal Diocese of Long Island (which includes Brooklyn and Queens, as Long Island geographically does) officiated, The Reverend Doctor Allen Robinson was instituted as the fifteenth rector of Grace Church, which has stood on Hicks Street between Grace Court and Joralemon Street since 1847. The service was attended by many Grace parishioners, as well as by local clergy of many faiths and Episcopal clergy from throughout the Diocese. There was also a delegation from Rev. Robinson’s former church, St. James Lafayette Square in Baltimore, along with The Right Reverend Robert Wright, Episcopal Bishop of Atlanta. 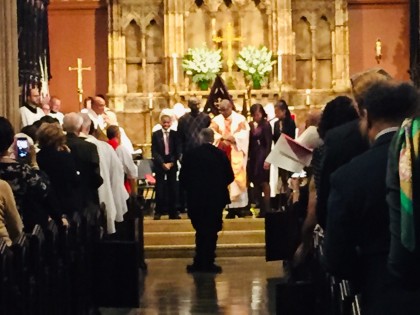 Rev. Robinson and his family were warmly welcomed by the congregation.