The tenth annual Brooklyn Folk Festival happened April 6th through 8th at St. Ann & the Holy Trinity Church. As it always has been, it was presented by the Jalopy Theatre and School of Music in Red Hook, now a not-for-profit institution. 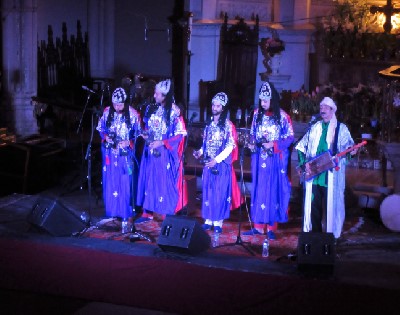 Grammy nominated Innov Gnawa are exponents of gnawa, or Moroccan trance music. This musical tradition has roots in Morocco similar to those of blues and jazz in the U.S., as it was brought there mostly by slaves from sub-Saharan Africa. At right in the photo above is Maalem Hassan Ben Jaafer, the bandleader, who plays a three-string sintir bass lute. The lyrics are chanted, call-and-response style, between Ben Jaafer and the chorus, whose members also shake hand-held instruments. 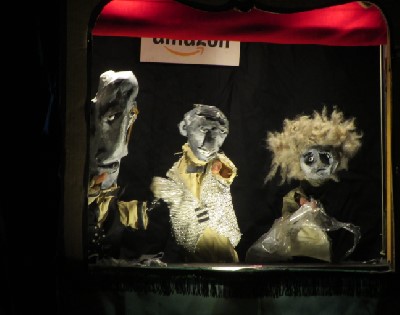 The Boxcutter Collective presented a puppet show featuring Judy (at right in photo above), a “tough as nails New York City grandma” who has a perils-of-Pauline sort of day, beseiged by various patriarchal figures and even attacked by birds and flowers, until she discovers and is taken into a witches’ coven that cooks up a potion to thwart Google’s attempt to take over the world. 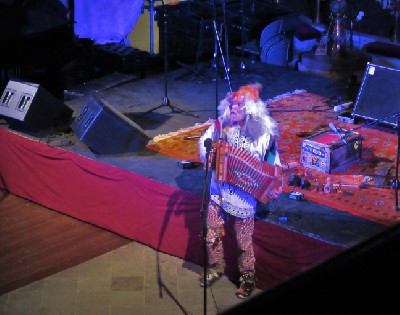 This year the Festival featured a return performance — he was here in 2016 — by Claudio Montouri, the “Birdman of Rome.” He’s a popular street performer in the Eternal City. After performing some squeeze-box magic (photo above), he sat on the stage and invited children, of whom there were many at the Festival, to gather around while he played some electronic music and amused the kids with many toys arrayed around him. 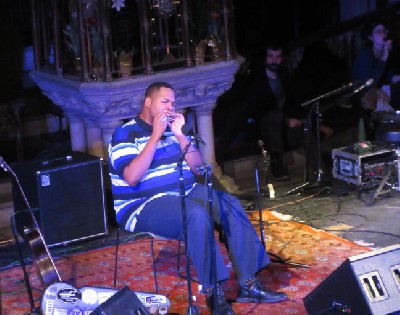 Jerron Paxton has been a regular performer at the Festival for some time, and never fails to impress. This year did a mixture of blues, folk, and ragtime numbers, accompanying himself on guitar and banjo, and playing harmonica (photo above). 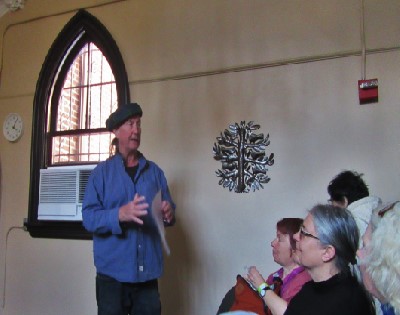 I couldn’t resist an entry on the Festival’s schedule for a movie, Gold, that I’d never heard of, described as follows: “Filmed in 1968 in the remote foothills of the Sierra Mountains, this wacky piece of celluloid captures the essence of the sixties with a reasonably coherent story.” The “essence of the sixties” turns out to be the ancient struggle between the followers of Hermes, the trickster god, and Apollo, the guardian of Order, as described in the context of 1946 by former Heights resident W.H. Auden in his poem “Under Which Lyre”. Seen from today’s perspective, is anything new under the sun? Your correspondent was delighted to find his late Lion’s Head drinking companion Garry Goodrow playing a prominent role. Besides, how could I hate a movie with a soundtrack that includes both the MC5 and Ramblin’ Jack Elliott? Gold’s co-director and auteur-on-the-fly (now that’s Hermetic) Bob Levis was on hand (photo above) for a lively post-viewing discussion. 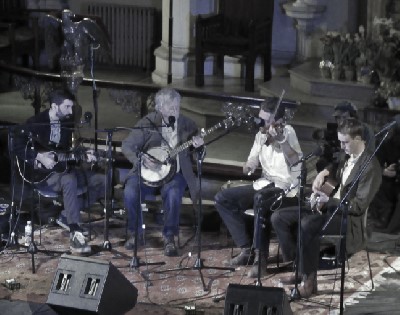 The Down Hill Strugglers were joined by John Cohen (second from left in the photo), formerly of the New Lost City Ramblers and the Putnam String County Band, for a very lively set, highlighted, for this train buff, by a stirring version of “Casey Jones.” On guitar, at left in the photo, is Eli Smith, who also served as emcee for the Festival. 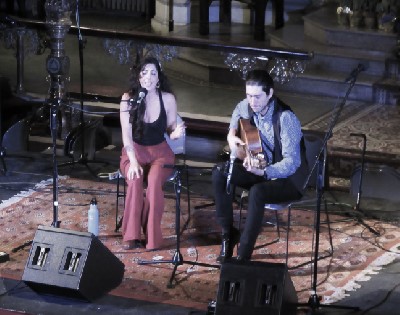 The Festival closed with a set by Julia Patinella, accompanied on guitar by Andreas Arnold. She did songs from the Spanish Flamenco and Latin American traditions in a voice of remarkable range and expressiveness. It was a fitting adios.

There were many other musicians and groups, as well as non-musical events and workshops, not all of which your correspondent could cover. One of these groups included cartoonist R. Crumb on mandolin. Over its ten year history, the Festival has grown in breadth and quality. We look forward to its next incarnation.