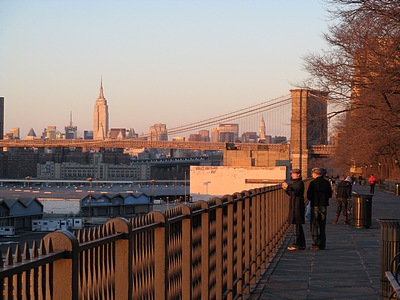 Further details concerning Mayor Bloomberg’s planned infrastructure projects in Brooklyn, funded by federal stimulus dollars or by City funds freed up by the federal infusion, were released today by the City government. Particulars of some of the projects in Brooklyn are as listed below. With regard to the Brooklyn Bridge renovation:

Description: The ramps leading to the Brooklyn Bridge in Brooklyn and Manhattan will be rehabilitated and widened and the entire bridge will be repainted. The improvements to the ramps, which are in poor condition, will improve traffic conditions, particularly from the FDR Drive and the repainting will prevent steel corrosion and repairs for decades to come. More than 100,000 vehicles and 4,000 pedestrians and 2,600 bicyclists cross the Brooklyn Bridge every day.
Total Project Cost: $382 million
Direct Stimulus Funding: $47.2 million
Pre-Stimulus Funding: $382 million City Capital Funds
Funding Displaced to Other Projects: $47.2 million
Construction Bid: Spring 2009
Estimated Completion: Summer 2012

The City’s press release also noted that citizens may check on progress of these and other City projects funded by the federal stimulus on the Stimulus Tracker at the City’s website.

Off Topic: Paul Sidney, Radio Legend, Dies
Warning: Proposing to Your Beloved on the Brooklyn Bridge May be Hazardous