It’s not very often you come across someone who for something other than financial reasons makes you think, “that guy’s got it made!”   WLNG’s Paul Sidney was such a person.

Years before I became a blogger with a funny name in my spare time, I was a radio “personality” using my funny real name full time  at WRCN/Riverhead, NY aka the “gateway” to the Hamptons.  I started out doing overnights, shifted to afternoons, then to mornings and back to afternoons.

It’s been 22 years since I first keyed on the mic at that radio station but the friendships I made there are as strong now as they ever were.  Sure we don’t see each other every day anymore but we’ll always share the bond of simultaneously going through the best and the worst times of our lives together.  One of the great things we still bond over is our love of another Hamptons radio station – WLNG. 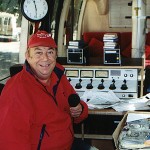 If you’ve spent any time on the East End, you’re probably familiar with 92.1 WLNG.  If you’re not, here it is in a nutshell – it broadcasts in mono not stereo, there is a constant echo chamber on the music as well as announcers and it boasts tens of thousands of jingles.  The station’s Winnebago and its mascot Happy Hare are present at virtually every event in the area 365 days a year.  They play oldies but not the same 300 you’ve heard your whole life over and over again.  For any radio geek who grew up in New York City listening to WABC-AM, WINS-AM (when they played music) or even 99X,  WLNG is the best radio station you’ve ever heard.  Strike that,  WLNG is not just a great radio station, it’s a lifestyle.

Today we heard the news that Paul (who was from Brooklyn), the station’s main on-air personality, one time shareholder and probably the best local broadcaster in the world has died at age 69.

Paul was a great guy.  He appreciated the fact that we all shared a mutual love of  radio.  On many weekends much of the WRCN gang would get in a car and follow the WLNG Winnebago around  just to watch Paul do the  kind of  hyperlocal community radio that by 1988 had all but vanished.    Despite that fact and the changing reality of radio since then, to all of us, Paul Sidney was living the dream.