When Adam Yauch Park was desecrated by anti Semitic and pro-Trump graffiti on Friday afternoon the community reaction was swift.  Law enforcement deemed the incident a hate crime and the City Parks Department immediately painted over the offensive tags.  State Senator, Daniel Squadron deftly organized a bevy of elected officials and religious leaders for the “Stand Up Against Hate” rally.  Within 24 hours, it was announced Adam Horovitz, aka “Ad-Rock” of the Beastie Boys and the Anti Defamation League would also participate. By Saturday morning, children had re-decorated the playground with messages of love.

Sunday morning was blustery and cold yet hundreds of residents along with numerous elected officials and religious leaders, packed the park for a demonstration of solidarity and the denouncement of hate in a post-election world.  Senator Squadron presided over the event.  In his opening remarks he emphasized, “Hatred has no place in our backyard, no place in our city and no place in our country.  Anyone who thinks the current political climate will allow oppression to win in this country is wrong.” 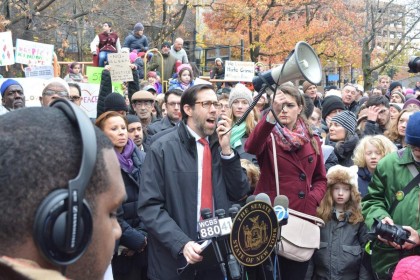 Imam Khalid Latif-University Chaplain at NYU & NYU Islamic Center Director-implored, “For us as New Yorkers, if you see something say something has to mean something different today…in our city, we have to set an example that is different than the rest of this country…we in New York will always be together.” Brooklyn Heights Synagogue’s Rabbi Serge Lippe warned against the normalization of hate crimes and vandalism. He called upon Donald Trump to “forcefully and unequivocally denounce these behaviors and those who wish to use his name and election as a pretext stoke the flames of anti-Semitism, bigotry and hatred.” In part he closed with, “As Americans we cannot and will not ignore these actions, nor can we afford to be silent.  For our silence will be heard as indifference or worse permission for further acts of vandalism and G_d forbid, violence.” 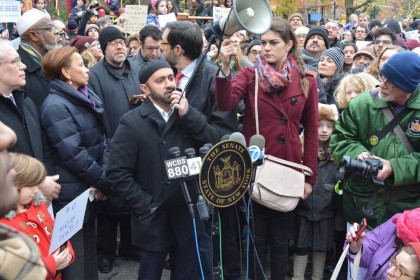 Numerous public officials made their own remarks including Congresswoman Nydia Velazquez, Brooklyn Borough President Eric Adams, Public Advocate Tish James, Comptroller Scott Stringer, Councilmembers Stephen Levin and Brad Lander and Carmelyn Malalis the Commissioner and Chair of the NYC Human Rights Commission. More of their statements are included in the official event press release. But it was Ad-Rock from whom everyone was waiting to hear. 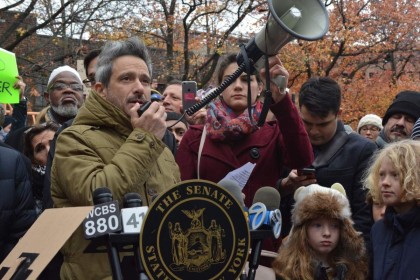 Adam Horovitz, aka “Ad-Rock” of the Beastie Boys

“I’m assuming that we are all here because we are thinking the same thing; spray painting swastikas in a children’s playground is a messed up thing to do!” began Horovitz. “And for many of us, it has special meaning because this park is named for Adam Yauch who was my friend and band-mate for over 30 years. But he was also someone that taught non-violence in his music and his life to all of us and to me.”

Continuing, Horovitz did not mince words and drew a direct line from the uptick in hate crimes across the country  to the outcome of the election.  He encouraged, “Do what you can,” and name checked several organizations to which citizens may donate and/or volunteer their time and skills. “Take what you’re good at and what you truly enjoy and lend your services to the causes you care most about.”  Finally, he evoked popular Beastie Boys’ lyrics to rousing cheers, “Because we can’t and we don’t and we won’t stop!” For his full remarks, watch Brooklyn Paper’s video in its entirety below:

Attendees came from near and far to participate in the rally. Hayley, a Brooklyn Heights resident and mother of three, reflected, “It is important to show our children that we will not tolerate hate speech in our community.  This is a playground where my son goes to shoot hoops with people of all races, religions and genders and it was heartbreaking to see it denigrated in such a sick way. It was meaningful to see such a rapid and emotional response from our elected leaders, the police and the Parks Department.”  Mike Kearney, Andrew Katz and Malcolm Riddle, co-founders of MCA Day traveled from Boston and the Washington, DC area respectively to participate. 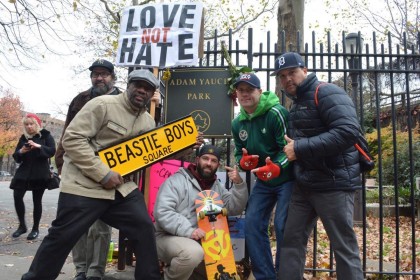 In addition to the speeches, throughout the event, the crowd was also led into renditions of the national anthem, the spiritual “We Shall Overcome” and Woodie Guthries’ “This Land is Your Land.”  Other celebrity attendees included musician, artist and activist Kathleen Hanna, (Ms. Hanna is also married to Horovitz) and actor and comedian Ben Stiller.  Love trumps hate, indeed.