Did anyone walk by Cadman Plaza yesterday and get an icky feeling all over? That’s because Martin Shkreli, aka the Pharma Bro, was stinking up the Eastern District federal courthouse. And what does Pharma Bro do after a hearing on his securities fraud case that could land him in federal lockup for many a years? Tweet to his “fans” to meet him for happy hour at the nearest neighborhood bar, of course.

But, our very own Henry St. Ale House was having none of it. CNBC was the first to report the twitter shut-down by the Ale House of the “fan meet-up” that was planned there. Here’s the twitter exchange: 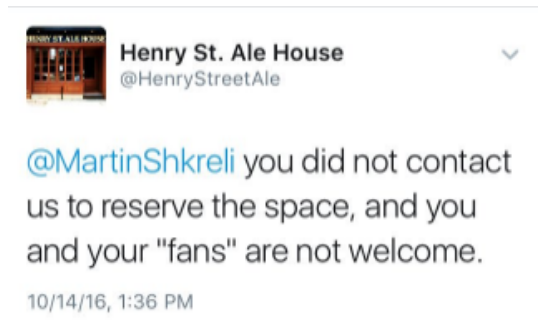 The Ale House’s manager told CNBC, “We’re a small place, and we operate a restaurant. We’re not a big bar. This has nothing to do with politics, but this is a controversial figure. We’re a low-key place, we needed advance notice.”

So, you’re asking – Pharma Bro has fans? Apparently, yes. And Gothamist reports that one even called for a boycott of the Ale House.

Oh, thank you, WineNot. Please do get yourself and all of your kind to boycott and never step foot in our Ale House.

Next BHB meet-up at the Ale House? All in favor, say aye.

Update: After being turned away from Henry Street, Shkreli tweeted that the meetup would be at Brooklyn Public House, 247 DeKalb Avenue in Fort Greene. Instinct reports that the owner of Brooklyn Public responded by tweeting that the price of all drinks was being increased by 5,000% (the same percentage by which Shkreli increased the price of an AIDS drug).