If humans could be landmarked, Raf “the Leo” Perez would be a prime candidate for neighborhood preservation. Born in the Bronx, but bred and beloved in Brooklyn Heights, he’s one of our most cherished sons. Raised on Monroe Place where his father’s a live-in super, Raf himself is now the live-in super at the building next door. Raf finished K through 8th grade at P.S. 8, when many in the neighborhood didn’t dream of sending their kids there; during those days when the shiny St. George student dorms were gritty S.R.O.’s. Raf grew up to become a local business owner and named one of The BHB Ten in 2012.  You don’t get more Brooklyn Heights street-cred than that. 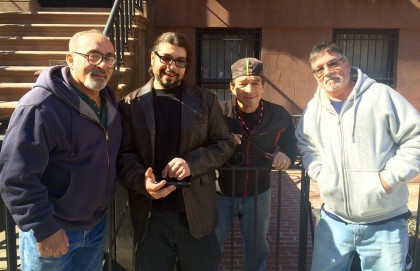 Raf with his “uncles” and dad, Ralph Perez, on the far right, on Monroe Place.

Those new to the neighborhood may not know that Raf started working at the now-defunct Mr. Video III on Clark St. at the age of 16, and in 2009, bought the store from his boss. Succumbing to the era of Netflix, Raf closed the store at the end of 2013, but not for a lack of trying. (Even the venerable Kim’s Video in Manhattan was forced to shutter that following summer.) Raf’s customers no doubt remember the store for its homey, neighborhood feel, and the friendly, knowledgeable staff, including Pauline and Sal (both doing well, says Raf). As for Raf, a Yelp reviewer said it best – “He’s a great guy, one of those people who makes you feel better even if you’re talking about the weather or about what you had for lunch. ” 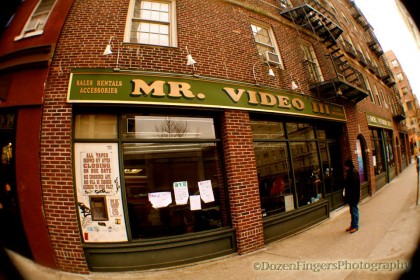 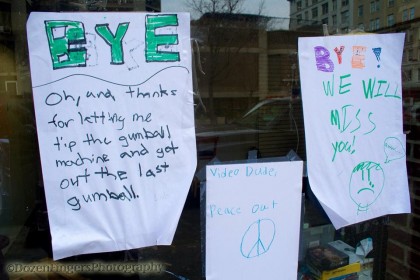 This post was meant to be an interview with Raf, but while exchanging emails about what to cover, he wrote something that couldn’t possibly be topped by any Q&A session. With Raf’s permission, here’s the email in full:

Thank you so much for thinking of me for participating with you and so many neighbors of this great, kinda post-suburban, now ridiculously loud, and becoming lower Manhattan, Brooklyn Heights.

It’s been a long road since closing Mr.Video/Heights of Video (in its last years). I feel the entertainment industry has taken a hit, starting a long time ago. I think the middle class is greatly affected, and a lot of people are more than upset about it.

Growing up as the son of a super on Monroe Place, having friends whose fathers were supers, in the neighborhood, in the city, I got to see a lot of behind the scenes ‘how to do’s and not do’s’ of problem solving. “How to change a switch,” “how to fix a leak,” “how NOT to plaster a wall,” all kind of came natural to me when the opportunity to be one (a super) came around the bend before the video store closed.

The opportunity to buy Mr. Video led me to believe that if I worked hard, if I made sacrifices, if I fought hard enough, it (the store) could last. Well, that wasn’t the case. The store closed and I thank my lucky stars for having two jobs at the time before the closing. The case isn’t the same for many folks who don’t/didn’t have those circumstances. I’m not special, and as I stated, I worked hard, I made sacrifices, and I put up a fight to keep it going as long as I did, but it was time to quit.

The store like so many other businesses that the middle class is made up of – Soundtracks, Boro Photo, Mr. Video, Heights Kids, Metro Comics, Heights Cinema, All Security Locksmiths, Walden Books – were all under that umbrella, of hobbies and entertainment, had to close their doors. And neighborhoods suffer. This neighborhood suffers. They suffer of boredom. Lack of exposure to the arts of art.

Now, I understand this is a blog for Brooklyn Heights, and maybe I ought to tone it down a little. So back to being a super on Monroe Place. The blessing behind closing the video store for me, was I got my weekends back. Over 20 years of Saturdays and Sundays under my belt and the change was unexpected. It’s weird walking by and not going into the store (I still haven’t to this day), and it was a huge adjustment, and it still is a little bit. For a few months, I woke in a panic of how long my day was going to be, before I realized “I don’t have the video store anymore.” I also suffered some family losses, which ‘does anyone ever adjust?’

I’ve had a lot of growth without the video store, I still haven’t pushed that Netflix button, but I am partial to Amazon and love YouTube. The super position really keeps me busy, and I have a great bunch of tenants. I know a lot of them from the video store days, which makes ice breaking easier. A few neighbors are familiar with me from even before the video store days, and the newcomers to the ‘hood always love to hear stories of those times. I love that the video store members remember me, that I remember them (not all by card number), but it’s the kids too. I hardly recognize some of them, and they’re bigger now, bigger than me in some cases. I used to chase some of these little toddlers through the aisles of the video store. Now they call me ‘sir’ and it’s pretty mind blowing.

In closing, I want to thank you again for the time and revisiting. I look forward to more collaboration with you and BHB in the near future.

Raf had a rough past three years, having lost his mother Debbie and younger brother Isaac. Despite the tough times, with the help of his loving and supportive girlfriend Heather, Raf finished voice-over training at Edge Studio last year. He’s looking forward to more growth, personally and professionally, in the coming years, and we at BHB wish him all the good in life.

See you around the neighborhood, Raf.